Bayswater is a residential and industrial suburb 28 km east of Melbourne.

The area was originally part of Scoresby North and settlement began in the 1860s. Many settlers were German. A school was opened in 1874 in a building provided by the Lutheran Congregation. A State primary school was opened five years later.

Some distance to the west at The Basin, James John Miller, bookmaker and publisher, had a substantial property named Bayswater House, in recognition of his birthplace. The name Bayswater was given to the school in 1890. When the railway line to Upper Ferntree Gully was opened in 1889 the station at Bayswater was named Macauley because that was the name of the post office. It was however superseded by Bayswater in 1894. The station was one of four from Ringwood to Upper Ferntree Gully. Today there are eight stations.

By the turn of the century the German community had diminished, the Anglican church (1908) acquired the Lutheran chapel, and a Methodist church had opened in 1893. Social facilities included a public hall, sports ground and tennis courts. Bayswater was described in the Australian handbook in 1903:

The Bayswater district had several orchards and other agricultural holdings, and a population of nearly 900 at the 1911 census. During the years leading up to World War II Bayswater acquired a police station, a baby health centre and a shopping centre with a few storekeepers, a butcher, baker, wine saloon and a motor garage. It was patronised by orchardists, poultry keepers and nursery workers.

Postwar growth was strongly signalled when Dunlop Rubber established a factory in Bayswater North in 1952 for making aviation products. Nearby British Nylon Spinners built its factory in 1956. There is a substantial shopping centre, including Mountain High Plaza (2011) near the railway station. Westwards is housing, with three primary schools to cater for the children of later postwar families. The secondary college is in the north of the suburb, within walking distance of the railway station.

Details of Bayswater’s schools, past and present, are:

In the early postwar years Bayswater had its second inflow of German-speaking residents who had been internees at Tatura. All were members of the Temple Society.

The Society, formed in the 1850s-60s, broke from the German (Wurttemberg) Lutheran Church. Many settled in Palestine in the early 1900s, but were treated as internees when World War II began. When released they settled in Boronia and Bayswater. On a large piece of land purchased in Bayswater they built a hall (1961), aged persons’ home (1973) and a residential village (1998). The Society is active in charitable and community affairs, and it is probably no co-incidence that the adjoining Bayswater South primary school has lessons in English and German languages. In Bayswater 2.7% of residents speak only German at home (2011 census).

Bayswater's census populations have been: 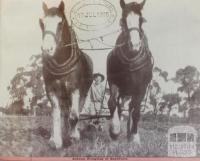