Yapeen is a rural village on Campbells Creek and the Midland Highway, 8 km south-west of Castlemaine. It is situated in the area occupied by the Strathloddon pastoral run, taken by William Campbell in 1840. (Campbell is credited with being the first discoverer of gold in the region, and the creek is named after him.)

In 1856 several gold discoveries were made on the Strathloddon run in the vicinity of Yapeen. Known as Taylors Paddock (after the run’s new proprietor) it spawned small settlements named Donkey, German and Mopoke Gullies. The overall goldfield was known as Pennyweight Flat, the name given to the area’s first school (1858), not far from the Yapeen school which replaced it. The name ‘Yapeen’ was given in 1861 to an emerging township on the main road, and is thought to be derived from an Aboriginal word meaning green gully or valley.

Bailliere’s Victorian gazetteer (1865) recorded Yapeen as having two hotels, two stores and a post office. The two large mining proprietors were the Aberdeen Gold Mining Company and William Mein. Mein’s presence is preserved by the ‘Old Marsh’ house (1855), a prefabricated two storey house which is on the Australian and Victorian historic buildings registers. There was also a Methodist church (1860).

In addition to the mining settlements around Yapeen there was also a Chinese mining town of up to 6000 persons south of Yapeen, near Guildford.

Mining relics can be found around Yapeen, including waterwheel abutments in Mopoke and German Gullies. The former wheel was about 20 metres in diameter, driving the battery for the Champion Reef. Elsewhere Yapeen is mainly used for grazing.

Yapeen has a tennis court and a brick school building fringed with peppercorns. The school had 26 pupils in 1998, but only 2 when it closed in 2010. Worship at the Methodist church ended in 1965. The school building is used by Castlemaine secondary college. The census populations have been: 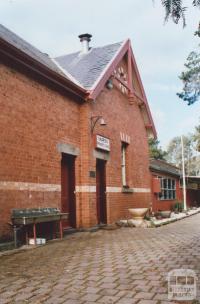 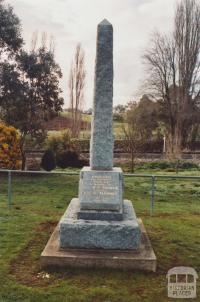 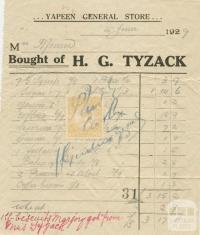