Victoria’s Wimmera region is immediately east of the South Australian border. Its southern boundary has usually followed an irregular line formed by former municipal boundaries, passing a few kilometres north of Ararat and skirting the Grampians range’s northern slopes. The northern boundary has usually been a line passing through Lake Hindmarsh, but statistically the boundary has extended northwards into the Mallee region. The eastern boundary has been more variable, sometimes being the Avoca River but statistically pulling up west of there. The river is probably the more realistic boundary, as Charlton on the Avoca River is considered to be in the Wimmera.

The Wimmera region was described and named by the New South Wales Surveyor General, Thomas Mitchell, during his Australia Felix expedition in 1836. It is thought that the name was derived from Woomera, describing the Aboriginal throwing stick. Mitchell named not the region, but the Wimmera River, which rises in the Pyrenees range near Ararat, flows north-westerly through Horsham and empties into Lake Hindmarsh near Jeparit. The river also divides into effluent streams, the Yarriambiack and Dunmunkle Creeks, the former emptying into Lake Coorong at Hopetoun in the Mallee region. In the east of the Wimmera the Avon and Richardson Rivers, rising in the Pyrenees, join at Banyena and empty into Lake Buloke at Donald.

These watercourses attracted pastoral settlement and the succeeding wave of farm selections. Towns tend to be found along them. The pastoral run Brighton was taken up in 1841 near Horsham. By 1851 pastoral occupation of the Wimmera was completed. In 1852-53 a gold escort route, running more or less via Avoca, Horsham and Kaniva, transported gold from Victoria to more profitable sale in Adelaide. It too was a source of settlement, an example being Apsley, west of Edenhope. Another place of settlement was Harrow at a crossing place on the Glenelg River on the far south of the Wimmera. (The Glenelg River rises on the western slopes of the Grampians, skirts the south of the Wimmera, and turns south into the Western District).

Along with the water retentive clayey Wimmera soils, the rivers and their headwaters have been a key to the agricultural development of the Wimmera. After the occupation of the south-eastern gold fields of Stawell and St Arnaud and the taking up of dry land wheat farms by selectors during the 1870s, infant local shires built weirs on the Dunmunkle and Yarriambiack Creeks. The Wimmera United Waterworks Trust was formed in 1882, which led to storages at the headwaters – Lake Wartook (1887) and Lake Lonsdale (1903) at the Grampians. Several others followed, the largest being Rocklands (Glenelg River) and Lake Bellfield (Fyans Creek) in 1953 and 1966. The Grampians scheme supplies stock and domestic water to the Wimmera for all of the area east of the Wimmera River, and further north into the Mallee where it is supplemented by water from the Waranga Western channel. It is a gravity system, as the Wimmera plains gently descend toward the Murray River.

Among the settlers attracted to the Wimmera during the 1870s and 1880s were German-Lutherans from South Australia and from Hamilton, further south. There are active Lutheran communities at Dimboola, Horsham, Minyip, Murtoa and Natimuk.

As settlers and water supply channels were extended into the Wimmera, they were often accompanied by railways and flour mills. Railways overcame distance and the gluey Wimmera soils when wet weather held up horse teams.

The railway reached Murtoa in 1878. By 1882 it had been extended west to Horsham and Dimboola, and by 1894 northwards from Dimboola to Jeparit. In 1886 a northwards line was built from Murtoa to Warracknabeal. The taking of the line further north awaited the clearing of the land of rabbit infestation. So bad were the northern Wimmera/Mallee lands for vermin by the late 1870s, that a vermin-proof fence was built in 1885-86 from the colonial border to the Murray River near Swan Hill. The fence kept wild dogs apart from their food supply, and trapping reduced their numbers and made sheep grazing more profitable. The rabbits were combated with trapping and poisoning, but it took until the 1950s for myxamatosis to seriously deplete the rabbit population.

Some of the settlers from South Australia came to the Wimmera because of exhaustion of their wheat lands by over cropping. They committed similar mistakes in the Wimmera, but the availability of guano manure and sturdier wheat varieties later offset the soil's declining productivity. The farmers were also persuaded to alternate cropping with oats and fallowing, and grazing sheep on the stubble for green manure. Over cultivation caused serious erosion and dust storms.

A traveller in the Wimmera in the 1990s would have been struck by the variety of non-wheat crops. The Richardson River has been good for barley, and malting-quality barley is profitable. Declining wheat prices also provoked diversification into canola, chickpeas, lentils and safflower.  Whereas in 1970 the Wimmera’s crop areas were 70% wheat, in 1996 they were 34% wheat.

The main transport corridors in the Wimmera are the Western Highway and the railway line to Adelaide. The corridors pass through Stawell and Horsham, the two largest towns, which have acquired increasing proportions of the Wimmera’s population. Other towns have been fortunate to maintain steady numbers, and most have declined in population.

The postwar census population trend for the Wimmera has been: 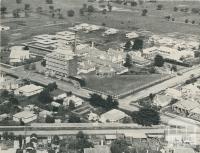 An aerial view of the Wimmera Base Hospital, 1960 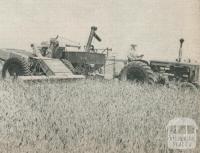 Bridge over the Wimmera River, Horsham

Wimmera River from the Bridge, Horsham, 1951 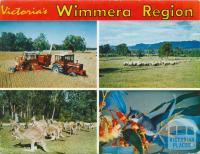 Images from the Wimmera Region 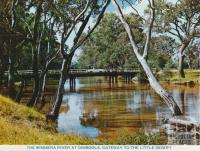 The Wimmera River at Dimboola, Gateway to the Little Desert 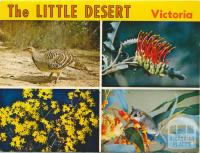 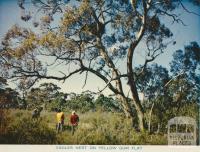 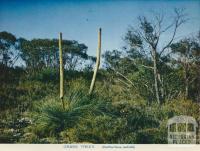