The pastoral run included part of the Wombat Ranges which were a refuge for colonial bushrangers. Harry Power (1818-92) is remembered by Power’s lookout, 15 km north-east of Tolmie, and Stringybark Creek is 8 km north of Tolmie. The latter place was where three police officers were killed by the Kelly gang in 1878.

In the 1880s farm selections were taken up in the Tolmie district, then known as Wombat Ranges. A school was opened in 1880, followed by a Presbyterian church in 1889, the year when the name was changed to Tolmie. The Wombat school picnic began in 1886, the forerunner of annual Tolmie Sports Days which continue to be staged at the recreation reserve. By the 1920s there were a general store, Catholic church (1904), hotel and mechanics’ institute (1920). The Country Roads Board also built a properly constructed road through Tolmie to Whitfield.

Farmers grew potatoes and oats as well as raising livestock. Despite several petitions, a railway never eventuated, but the rabbit problem was substantially overcome in the 1950s. Tolmie was still remote, and reticulated electricity was not connected until 1970.

Tolmie has a general store and a hotel near the corner of the roads to Benalla and Whitfield. About 2 km west there are the recreation reserve and the adjacent mechanics’ institute, Uniting (formerly Presbyterian) and Catholic churches. The former Toombullup East school building is a tea room at the reserve. The Tolmie school closed in 1953.

* includes 52 in Country Roads Board camp 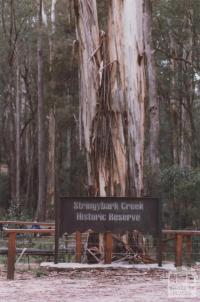