Tatong is a rural village in north-east Victoria, 23 km south-east of Benalla. It is in undulating country that rises southwards to the Tolmie ranges. The name is thought to derive from an Aboriginal expression, possibly referring to something unseen.

The Tatong pastoral run was taken up in 1847 and farm selections began in the 1870s. A hotel opened on the Tolmie Road in 1880 at Tatong and a school opened in 1890. Dairy herds were grazed on the Tatong flats and a cooperative creamery operated from 1892 until 1918. A hall was opened in 1904.

In 1914 a branch railway line was opened from Benalla to Tatong. It carried farm produce and Tolmie Ranges timber: a tramway brought the timber to Tatong, which had two sawmills in the 1920s. There was also a general store, a police station and a livestock trucking yard. St Albans Church of England (1921-96) and a rebuilt hotel of tudor design completed the village.

Most of those buildings have gone. The Tatong Tavern is the prominent remaining building, along with the hall (rebuilt 1970) and a Country Fire Authority station. The school closed c2006.

A bushfire in 2007 destroyed seven homes, sheds, garages and stock in the Tatong district. The blaze burnt out 11,000 hectares and moved from state forests to private property. The community centre was upgraded in 2014. 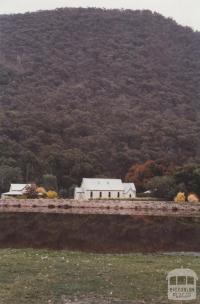