Myrniong is a rural village in the Pentland Hills, 60 km west of Melbourne. Originally on the Western Highway it is now bypassed by the Western Freeway to its south. Myrniong is 9 km west of Bacchus Marsh and 3 km east of Pykes Creek Reservoir (1911).

It is thought that the name is derived from an Aboriginal word meaning an edible root. Until about 1863 the locality was known as Blow’s Flat, not especially apt because most of Myrniong is hilly.

A school and a hotel were opened at Myrniong in 1859, township blocks were sold in 1861 and the Anglican church was opened in 1865. A flour mill on the Myrniong Creek preceded all of these and ran until 1879. In 1903 the Australian handbook described Myrniong:

The butter factory was operated by the Myrniong Cooperative and it continued until 1942 when milk deliveries were diverted to Bacchus Marsh.

Myrniong’s agriculture was affected by soil erosion in the Pentland Hills, and the Soil Conservation authority undertook reclamation works in the 1960s. Overlooking Myrniong is the Blackwood Range and Mount Blackwood 6 km northwards.

The most visible building in Myrniong is the roadside Uniting (former Presbyterian) church (1862). There is also a recreation reserve, a school with 169 pupils (2014), the Plough hotel/motel, a hall (1880), the original Anglican church and a Catholic church (1903) which replaced an earlier building. Along Main Street there is a former hotel, police station and police lockup.

Myrniong’s census populations have been: 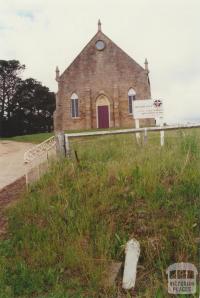