Mitcham is a residential suburb 20 km east of central Melbourne between Nunawading and Ringwood, bisected east-west by the Maroondah Highway and the railway line from Box Hill to Ringwood. It was named after Mitcham Grove, a farm property owned by William Slater who grew roses and herbs for perfumes and remedies. An alternative account is that it was named after a property called Mitcham Heights, itself named after Mitcham, Surrey. Previous names were Air Hill and Emery's Hill. All the names acknowledged Mitcham's elevation in relation to adjoining areas. One of the elevated points is occupied by the Mitcham reservoir (1923).

East of Mitcham the Koonung Creek begins its passage towards the Yarra River, and the Mullum Mullum Creek (also flowing to the Yarra), skirts the northeast side of Mitcham. In 1861 Johann Schwerkolt bought land bordering the Mullum Mullum Creek, beginning with grape growing but changing to orcharding after the Phylloxera infestation. The property was later acquired by the Antonio family, who donated part of their land for a bush reserve and the Antonio Park primary school (1960). Schwerkolt's cottage (1888) had been continuously occupied, and shortly afterwards was acquired by Nunawading council and restored for use as an historical museum.

Mitcham was occupied by orchardists and the clay (like neighbouring Tunstall), was good for bricks and pottery. The Australian Tessellated Tile Company (1886) south of the railway station operated until 1965. Roman Catholic (1872), Wesleyan and Anglican (1888) churches were opened. In 1882 the railway line was extended form Camberwell to Lilydale, and a station opened at Mitcham in 1886. A police station was opened in 1888 and a primary school was built in 1890 after lessons had been conducted in the Anglican church for two years.

Mitcham was described in the 1903 Australian handbook:

Subdivisional activity was flattened by the Depression, but the Austral Park estate south of the railway station was marketed in 1906. The memorial hall (1926-88) became the venue for musical and dramatic societies begun in the 1930s.

Mitcham also had scenic bushland. J.W. Audas, a Victorian botanist, wrote that one of Mitcham’s beauty spots was at Mullum or Deep Creek. Walking from Doncaster Road along Quarry Road there were many pretty views of the ranges, and its sides were bordered with a natural forest of Eucalypts with understoreys of heath, tufted lily and golden spray (1950).

At the end of World War II Mitcham's shopping centre in Whitehorse Road at the Mitcham Road intersection had four grocers, and butchers, fruiterers, newsagents, a draper, an ironmonger, boot repairers and a blacksmith. The banks and the post office were on the south side. Within ten years postwar residential expansion had reached Mitcham. During the 1960s new schools opened: Antonio Park (1960) and Verdale (1969) primary schools, a high school (1960) and a technical school (1965). The technical school was near the Nunawading Art Gallery, in which the Mitcham Arts Association (1965) was a notable participant.

From 1952 to 1980 the Catholic church functioned in a refurbished Nissen hut. Before the present church was built a primary school was opened in 1959 on an adjoining site. The timber Anglican church in Edward Street was replaced in 1958 by the modernist building designed by Raymond Berg.

By the mid-1990s Mitcham had undergone the full cycle of population growth, and fewer school-age people resulted in the closure of the secondary college on the old technical school site. Verdale primary school had been renamed Rangeview and its neighbour in Heatherdale had been closed. Mitcham primary school had 423 pupils in 2014.

Mitcham has several large parks north of Whitehorse Road, including Antonio, Yarran Dheran and a sports reserve. On the south side there is a linear park and a large portion occupied by Yarra Valley Water and the Mitcham Reservoir. In 2008 the Eastlink tollway was opened, running (partially tunnelled) along the Mullum Mullum Creek valley. The Mitcham shopping centre has strip shops along Whitehorse Road, the Mitcham Hotel and a drive-in centre a little to the north. There is also a small centre southwards in Mitcham Road.

A redevelopment saw the road and railway line separated in Mitcham Road and a new below ground railway station opened at Mitcham in 2014 replacing the previous station building.

Mitcham’s census populations have been:

Jean Cornell, Gathered into one: glimpses of Mitcham and its Methodist, Presbyterian and Uniting churches 1888-1988, Mitcham, 1988

House in bush setting at Mitcham, 1958 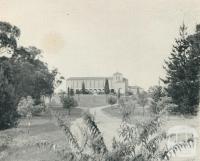 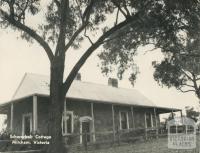 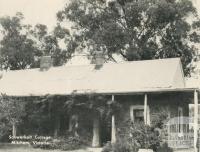 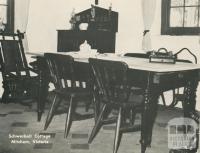