Mickleham is a rural village at the northern edge of metropolitan Melbourne, 7 km north-west of Craigieburn and the Hume Highway. The village is situated in the parish of Mickleham, the name of which was probably inspired by Mickleham, Surrey, England.

Mickleham is situated at the corner of Mt Ridley and Mickleham Roads. Mt Ridley, an extinct volcano, is about 4 km to the east, and was used as a viewing point by the explorers Hume and Hovell in 1824. The district of Mickleham lies between the Deep and the Merri Creeks, and Craigieburn is to its south.

European settlement of the village began in about 1855 when a Wesleyan school was opened. A government school replaced it in 1871. A double fronted building constructed in 1854 in Mickleham Road was a roadside establishment which became a hotel and local post office. Both the school and the old post office, built of bluestone, are on the Register of the National Estate.

Mickleham was an agricultural district with some dairying, and had a church, post office and a school until the 1950s. In the early 1980s T&G Insurance acquired 26 sq km of land extending east of Mickleham to the Hume Highway for development as the Mt Ridley residential township. The land included the Mt Ridley farm (1846) and homestead.

The release of blocks on the estate began in 1997. Their areas varied between one and four hectares with adjoining parkland and walking trails. The Mickleham Forest Park, a site with native grasses and red gums, is north-west of the estate.

A severe bushfire threatened Mickleham in 2014 and destroyed stock, about 20 homes and farmland.

Mickleham's census populations have been:

At the 2011 census, Italian was usually spoken at home by 12% of residents (Australia, 1.6%) and 47.1% of residents recorded an affiliation with the Catholic church. 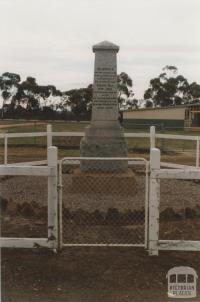