Matlock, situated on the Great Dividing Range, 110 km north-east of Melbourne, was the site of a goldfield and of a supply town for other goldfields in the nineteenth century. It was the highest township in Victoria.

The nearby goldfields were the Jordan, Woods Point and Gaffneys Creek. All were difficult to reach either from Melbourne or Gippsland. In 1862 and 1863 gold mines were opened either side of the Dividing Range about 2 km apart, near the future site of Matlock. By the end of 1863 a township had developed, called Emerald Hill. Because there was already an Emerald Hill in South Melbourne, the Board of Land and Works changed the name to Matlock in 1864, by when about 1000 miners were working the area. The town had two banks, followed shortly by a school (1865), Anglican and Catholic churches, lodges and 13 hotels. The town was sufficiently prosperous to attract Ashtons circus in 1866. By the end of the 1860s Matlock's prosperity was dented by the track to Wood's Point bypassing it and by gold discoveries further afield. In 1873 the town was destroyed by fire. It was rebuilt down from the summit, and the site is marked by a picnic shelter. Even so, the 1875 edition of the Australian handbook recorded a population of 217 and described Matlock as: 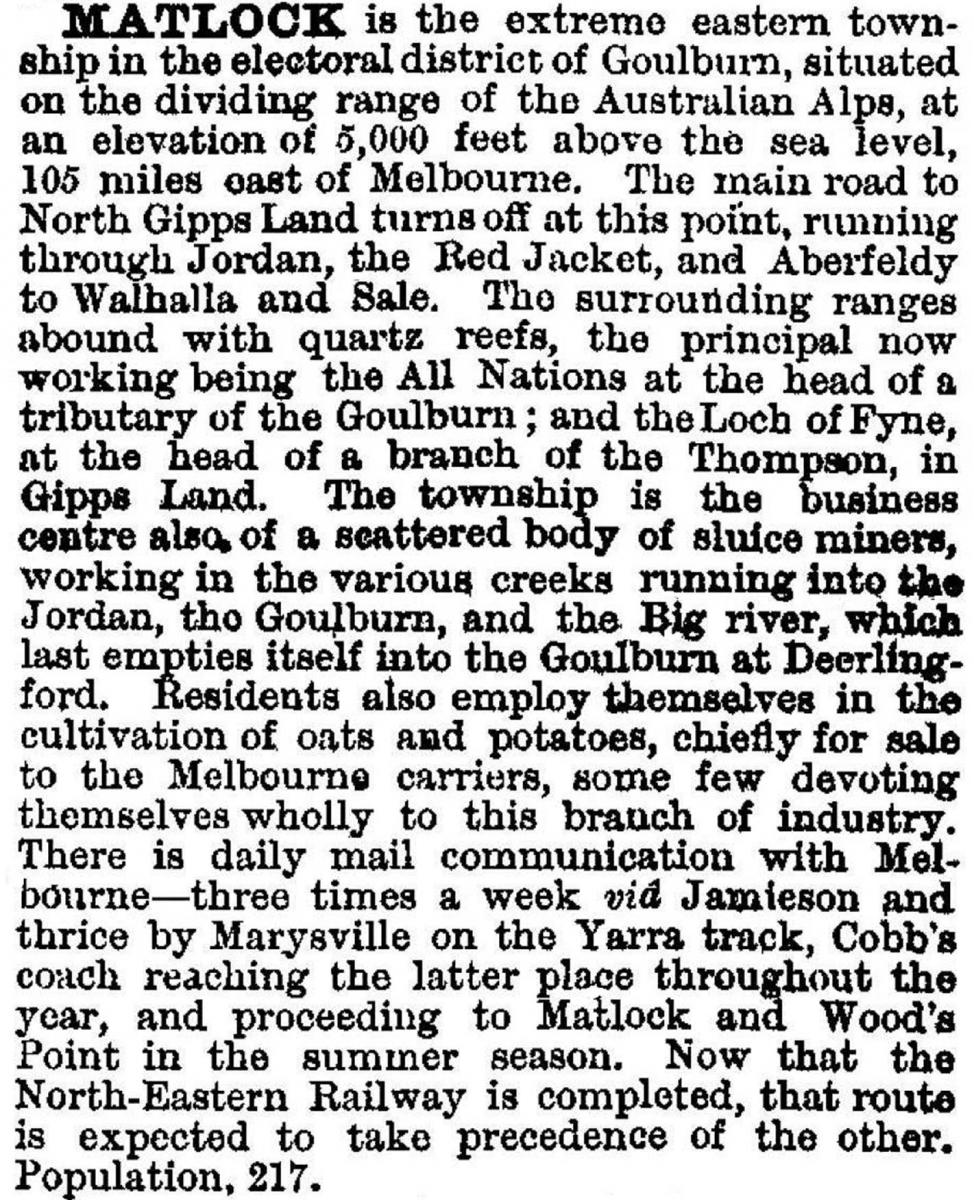 In the 1890s a new boom at the Loch Fyne and the All Nations mines injected fresh prosperity, and the 1903 Australian handbook gave the population as about 450:

The school was reopened between 1898 and 1911. By the 1920s only a handful of residents remained in Matlock, the two notables being the proprietor of the hotel, who stayed there after it was delicensed, and the postmaster. The Black Friday bushfires, 1939, destroyed the few remaining buildings on the summit, along with a timber mill. A sawmill operated between the late 1950s and 1975, and when it closed all but two cottages were removed.

Matlock had census populations of:

No further census figures were published.

The place is marked by a snow shelter at the roadside picnic area, the remnant cemetery and Matlock Hill off the road to Walhalla.

Anne V. Bailey and Robin A. Bailey, A windy morn of Matlock, Brighton, 1998

O.F. Tomlin, Gold for the finding: a pictorial history of Gippsland's Jordan goldfield, 1979