Marysville, a scenic township in the Great Dividing Range, is 75 km north-east of Melbourne.

The town was surveyed in 1864, by when a store and a butcher's shop existed to supply miners on the Yarra track to the Woods Point and Upper Goulburn goldfields. The Track had, in fact, been surveyed in 1862 by a Government working party, one of whose members John Steavenson, brought his new bride Mary Martha (nee Murphy) to reside in the locality. His name is commemorated by the Steavenson River and Falls and hers by Marysville, which is situated on the river. There was sufficient undulating land at Marysville for grazing and fodder production to supply travellers' horses and livestock. A school was opened in 1870. Marysville was described in the 1903 Australian handbook:

In 1890 a public hall, library and mechanics' institute were opened. Four hotels operated. However, traffic along the Yarra Track declined as the gold fields petered out and the opening of the railway to Mansfield in the Upper Goulburn region took more traffic away. Marysville instead developed as a tourist destination, and in the 1920s had twelve guest houses. The most famous was the Cumberland. Tourists were offered views, fern gullies and the Steavenson Falls, all reached by well formed tracks, and the Lake Mountain snow field about 15 km away. The Marysville Tourist and Progress Association was formed in 1924.

Timber getting in the Marysville district began with paling splitters in the 1860s. Mills were operating by the turn of the century, and one continued in Marysville until the 1990s. A considerable area of old growth forest remained around Marysville, and the Lady Talbot Drive traverses much of the best forest scenery.

Marysville's population was about 600 during the postwar period, but it was swollen by visitors and tourists. There were 20 accommodation establishments including the ‘El Kanah’ Cathedral Mountain Christian Centre. In 1972 the first Wirreanda Festival was held, featuring a gymkhana and other displays.

On the afternoon of 7 February 2009 (Black Saturday) an intense bushfire from the Black Range, 30 km north-west of Marysville, engulfed the township, destroying over 90% of the buildings and taking 34 lives. The cause was most probably arson. Most holiday accommodation (including the Cumberland) was lost, along with the school, community and medical centres and the police station.

The community, with help from the Victorian government and Murrindindi shire, has rebuilt some of the town. A temporary shopping centre was opened in December 2009, and the school and community centre were rebuilt by 2010. Gallipoli Park's recreation facilities were reinstated, a dormant football club revived and a netball club was formed. Community and farmers' markets restarted, along with the golf club. A new hotel and conference centre were also constructed.

Marysville primary school had 45 pupils in 2014.

Marysville's census populations have been:

Ann Thomas, The last of the Yarra Track stopping places, 1980

Mary Kenealy, The high way to heaven: a story of Marysville and district, Marysville, 2006

Countryside around the popular resort of Marysville, 1954 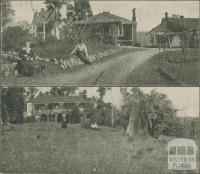 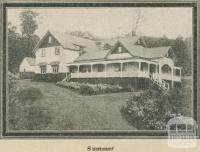 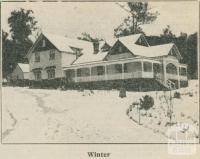