Geelong, overlooking Hobson’s Bay, has been the second largest city in Victoria since the 1930s. At the 1933 census its population of 43,353, just topped Ballarat’s at 41,658. The gold rushes of the 1850s and 1860s saw Ballarat and Bendigo outstrip Geelong to become Victoria’s great inland cities. Geelong, with its port, grew on gold exports and serving the woolgrowers of the western districts. A rail link between Melbourne and Geelong opened in 1857, and the line to Ballarat opened in 1862. Ballarat did not have a direct rail connection to Melbourne until 1889.

In the late nineteenth and early twentieth century Geelong saw notable industries around wool, from exporting bales to woollen mills, both now commemorated in the Wool Museum in Central Geelong, housed in an elegant bluestone warehouse. Geelong has suffered from marked industrial decline, with the closure of woollen mills and the coming closure of the Ford car plant. Geelong retains an oil refinery and a major grain terminal.

Geelong is only one hour on the train from central Melbourne, so its affordable housing makes it attractive to some Melbourne workers. And, as the gateway to the Bellarine Peninsula and the resort towns of Torquay, Apollo Bay and Lorne, along with the ‘Great Ocean Road’, it has many attractions within easy reach. The CBD has been rejuvenated with Deakin University, established in 1974 on an outer suburban campus at Waurn Ponds, taking over a number of the otherwise redundant warehouses overlooking the port.

Geelong, Victoria’s largest provincial urban region, is 65 km from central Melbourne across the Port Phillip and Corio Bays. It is on the Princes Highway between Melbourne and Victoria’s Western District.

Hume and Hovell, explorers, recorded the Aboriginal word 'jillong' in 1824, thought to mean land or cliffs, when they came to Corio Bay. The name 'Geelong' was derived from the Aboriginal word, and was given to the area by Governor Bourke in 1837 when he visited Port Phillip to also formally name Melbourne and Williamstown.

In 1838 shipping activity caused a customs house to be constructed. It has survived as one of Victoria’s oldest buildings, a round portable structure, and is in the Geelong Botanic Gardens. A town survey was made and land sales were conducted in February 1839. The Woolpack Inn (later Mack’s) was opened in 1839 and the Geelong advertiser began publication the following year. St John’s Presbyterian church was opened in 1841. The sandbar blocking access past Point Henry was successfully passed over, and cargo movements were henceforth shared between Point Henry and the Geelong waterfront.

During the late 1840s churches and schools were established and local industries such as flour mills, tallow works and vineyards were established. The Geelong town council was incorporated in October 1849.

In the year before the gold discoveries at Ballarat and Bendigo the first Bright and Hitchcock’s store was opened. It became a Geelong landmark until acquired by the Foy and Gibson’s chain in 1959. The opening of the goldfields greatly increased Geelong’s maritime activity, not least because the inland route to Ballarat was flatter than the one from Melbourne over the Dividing Range. Outwards traffic also increased with wool from the Western District pastoral properties. The rapid growth also brought Geelong’s second major retailer, Morris Jacobs, whose store was also a landmark until acquired by Myer Melbourne in 1950. Geelong’s population went from 8000 in 1851 to 22,000 in 1853. It thereupon stabilised, not reaching 30,000 for another sixty years.

During the late 1850s some of Geelong’s notable institutions and buildings were created: Geelong Grammar School and Geelong National Grammar School (later the Matthew Flinders Girls’ Grammar) in 1858, the Town Hall, Market Square, the mechanics’ institute, and the railway connection to Melbourne was opened.

In the municipal sphere Geelong’s future was curtailed like Melbourne’s, with the creation of closely adjacent road districts and suburban councils: South Barwon and Bellarine/Indented Head roads districts, Corio shire to the north, Newtown borough (1858) and Geelong West borough (1875). The resulting patchwork became the obvious first candidate for municipal reform in 1993. The Geelong council’s area was 13.4 sq km, less than a sixth of greater urban Geelong.

In 1860 the Geelong football club won its first local premiership. The year after, one of the club’s notable players, Charles Brownlow, was born. His first year as a player was 1879, and he captained the team in 1884 and coached it from 1892 to 1917. He is commemorated with the Brownlow Medal for the competition’s best and fairest player. Geelong played a pivotal role in the growth of football, and was called the Pivotonians until the 1950s when the name was replaced by the Cats. (The Pivotonians came from Geelong’s rail and port role as a pivot for Western District commerce.)

Geelong’s third notable educational institution, Geelong College, began in 1861. It was headmastered by the father of George (Chinese) Morrison.

During the late 1860s and the 1870s woollen mills, a meat preserving works and a brick and tile company were opened. The Barwon Paper Mill was opened near Fyansford in 1878, which was also the year when serious infestations of phylloxera were reported in the Geelong district’s extensive vineyards.

The Geelong mechanics’ institute fostered a technological school in 1869, which evolved to become the Gordon Technical College (1887) as a memorial to General Gordon of Khartoum. Extension of curricula led to it becoming the Gordon Institute of Technology (1921) and expansion to a campus at Waurn Ponds (1971), later Deakin University.

In 1894 a better seafaring lane across the sandbar was created with the Hopetoun Channel. Just before the formation of a harbour trust for the Geelong port, the Australian handbook (1903) described Geelong: 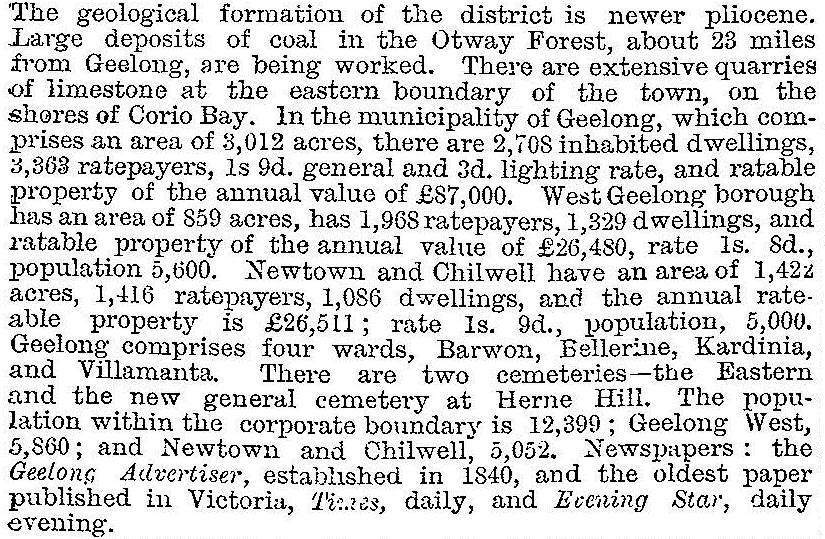 Geelong town became a city on 8 December 1910 and electric trams began running in 1912, but World War I and the years immediately after it were a quiet period. Between 1922 and 1925 Geelong’s future industrial growth began: three woollen mills, Cresco fertilizers and the Ford Motor Company’s vehicle plant near Corio (scheduled to close in 2016). The Corio whisky distillery (1928) and the Geelong Advertiser’s radio station 3GL (1930) were opened. In 1938 one of the last Port Phillip Bay steamers, Edina, made its final trip to Geelong, ending a romantic period of seaside excursions and contests for the fastest trip. On the eve of World War II the International Harvester Works were opened beside Ford, and a grain-elevator terminal was built at Corio Quay. Geelong was described in 1946 in the Australian blue book:

In the postwar years Geelong entered a glorious period of growth. Successive football premierships (1951-52) were won and local cyclist Russell Mockridge, won two gold medals at the Helsinki Olympic Games. Population growth was rapid as postwar migrants settled in new suburbs. The Shell Oil Refinery opened at Corio in 1954, and the on-rush to modernity saw retail takeovers from Melbourne and the closure of the electric-tram services. The Alcoa aluminium refinery was opened at Geelong’s pioneering landing place, Point Henry, in 1963. It employed over 500 people before closing in 2014. Between 1947 and 1965 greater Geelong’s population went from 58,400 to 101,600 persons.

The rapid development beyond central Geelong resulted in small old industrial premises becoming under-used or abandoned. The mixed-use core of Geelong, with a network of lanes for access to small subdivisions and loading yards, became anachronistic. Urban consolidation for redevelopment overtook older areas, much like inner Melbourne underwent site consolidation during the 1960s-80s. Market Square was developed in 1985, adding a department store, supermarket and 95 shops. Three years later in the adjoining block to the north Bay City Plaza was built with a department store, discount department store and 82 shops. The two sites added 45,200 sq metres of retail floor space to Geelong, bringing it to over 160,000 sq metres. It had been some years since electric trams took people shopping, as buses took over from them in 1954. In 2013 the Gillard federal Labor government announced that Geelong would be the headquarters of the national disability insurance scheme, DisabilityCare.

The Geelong city council boundaries extended from Rippleside at the western end of Corio Bay, along Western Beach and Eastern Beach and ended at Eastern Park, just beyond Limeburners Point. Eastern Beach with breakwater jetties and a swimming enclosure are the most notable amenities. Eastern Park contains the Botanic Gardens, which have numerous rare exotic trees, sports facilities and the Geelong High School (1910). There are several foreshore reserves, smaller reserves, Johnstone Park beside the town hall and art gallery and Kardinia Park at Geelong South, home of the Geelong Football Club since 1940.

Geelong’s commercial and retail centre runs along the Moorabool Street spine of the town’s 1838 survey. The waterfront end contained several wool-export and commercial buildings which were refurbished in the 1990s. The Dennys Lascelles warehouse (1872) Moorabool Street, became the National Wool Museum in 1987. The retail heart runs along the east-west Little Malop Street pedestrian mall, adjoined by the redeveloped Market Square.

Beyond these institutions is Geelong South, served by a railway station near the Kardinia Park football ground, Kardinia Park also has netball courts, a swimming centre and an elderly citizen’s club. The football ground has been progressively upgraded. There is a neighbourhood shopping area and a reserve beside the Barwon River. Further around the river there is the industrial area of Breakwater, which adjoins Geelong East. The Breakwater railway station was near the Geelong racecourse and showground (1907).

Over thirty buildings and structures in the former Geelong city are on the Victorian Heritage Register. Notable among them are seven warehouse/commercial buildings, Christ Church (1843), St John’s Lutheran Church (1841) and the old post and telegraph offices, in addition to those previously mentioned. The art deco T&G Building on the corner of Ryrie and Moorabool Streets was converted to student accommodation for Deakin University students in 2014-15.

A pilot project to restore the reefs in Port Phillip Bay and boost local shellfish and fish numbers was commenced in 2014.

The suburb of Geelong faces out on to Corio Bay. Its western and eastern boundaries are Latrobe Terrace (Princes Highway) and Garden Street, and its southern boundary is the railway line that passes through South Geelong. The suburb contains Geelong’s central business and shopping areas, foreshore and beach reserves (including Eastern Beach swimming enclosure), the Geelong hospital, Deakin University waterfront campus, Gordon Institute of TAFE and the Matthew Flinders’ girls’ secondary college. The suburb’s census populations have been:

C.P. Billot, The life of our years: a pictorial chronology of Geelong, Lothian Publishing Co, 1969

Russell Stephens, Road to Kardinia: the story of the Geelong Football Club, Sydney, 1996 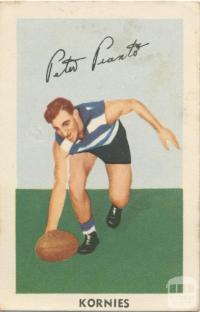 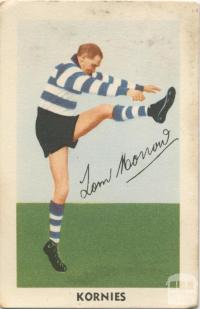 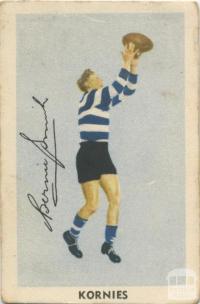 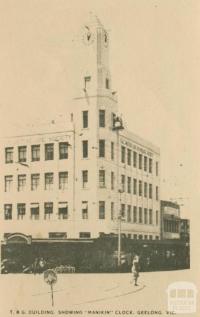