Dingley Village, between Springvale South and Moorabbin Airport is a residential and industrial suburb 23 km south-east of central Melbourne. It was Dingley before being renamed Dingley Village in 1991.

In 1856 Thomas Attenborough bought land in the area and named his house Dingley Grange, after Dingley Hall which had existed near the town of Melbourn in his native Northhamptonshire, England. A farming community developed, relatively remote from either the bayside or Gippsland railway lines, moving into market gardens and poultry to supply metropolitan markets. There was no identifiable centre to the area apart from Christ Church (1873) at the corner of Centre and Old Dandenong Roads, with its attractive architecture and bell tower. The church is heritage listed.

A family of five brothers, the Gartsides, solved the problem of vegetable gluts by opening a cannery in about 1920. The cannery employed up to 50 local people. They donated land for the primary school which opened in 1925. In 1936 the Kingswood Golf Club, Dandenong, opened its new course at Dingley. A progress association was formed in 1947, and a recreation reserve acquired in 1954.

Urbanisation in Dingley began in the early 1960s. It is estimated that the population increased from 450 to 1800 during 1960-64. A small shopping centre, school, kindergarten, reserve and later, Sunday markets on the reserve created a village atmosphere which resulted in the official change of name.

A Catholic and the Kingswood State primary schools opened in 1974 and 1976. Behind the shops in Centre Dandenong Road there is a recreation reserve, a council library and the Harold Box Hall, named after a Dingley poultry farmer and Mayor of Springvale city. Near the Moorabbin airport is an industrial zone set in a garden landscape, separated from the Dingley Village residential area by a reservation for the Mornington Peninsula Freeway.

The census populations of Dingley have been:

G.M. Hibbins, The history of the City of Springvale: constellation of communities, Port Melbourne, 1984

Carrots for the market, Dingley, 1955 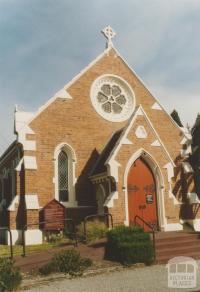