Dalmore is a rural locality about 5 km from the northern shore of Western Port Bay, and about midway between Tooradin and Koo Wee Rup.

Dalmore was originally known as Koo Wee Rup West, and was located toward the eastern edge of the Koo Wee Rup Swamp. Land was sold in large parcels in 1875 and the land owners undertook substantial clearing and draining for pasture development. The Tooradin to Lang Lang railway line was built in 1890, with a station at Koo Wee Rup West. It was renamed Dalmore in 1909, after the name of the largest of the properties from the 1875 land sale. A post office was opened in 1915 and a school in 1920.

During the 1920s a number of market gardens were established on Dalmore's rich peaty soil, but the financial depression caused many of them to fail. They were ahead of their time, until the postwar expansion of Melbourne absorbed many market gardens closer to Melbourne and Dalmore became conveniently positioned. Water is supplied from aquifers and from the numerous drains that substitute for stream beds.

Asparagus is the district's leading vegetable for local and overseas selling. Dalmore is one of Victoria's largest vegetable growing areas, and the Dalmore Cold Store is in Manks Road.

The census populations of Dalmore have been: 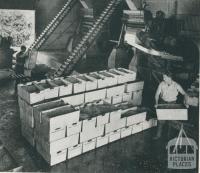