Corio is a residential and industrial suburb in the Geelong region, 9 km north of Geelong and 56 km south-west of central Melbourne. It adjoins Corio Bay, which is on the western side of Port Phillip Bay. It is thought that the bay was named after an Aboriginal expression meaning sandy cliffs (of the bay) or small marsupial.

Corio as a place has extended from North Shore, where the Corio Quay is formed around the outlet of Cowies Creek, to north-eastwards around Corio Bay to Avalon.

In 1851-52 subdivided land was sold at Cowies Creek, in anticipation of a town forming around a future port at the mouth of the creek. A township with two hotels, a Common school and a post office, and a scattered population of about 500 persons, emerged by the mid-1860s.The name Cowie was given to a railway station, since renamed Corio, 3 km north. When the Geelong Grammar School moved to its new buildings in 1914, further around Corio Bay, Cowie and Corio were at first interchangeable. By the mid-1920s Corio had displaced Cowie as a name, and the area around Cowies Creek became North Shore.

The industrialisation of Corio Bay began at the turn of the century around the mouth of Cowies Creek. As Geelong North and North Shore were occupied, land at Corio was taken in the postwar years. The largest development was the Shell Oil Refinery (1956). During the late 1950s the Housing Commission built the first of its Corio estates. Within about 20 years the Commission built five estates comprising 2500 houses at Corio.

The Cowies Creek/Corio primary school closed in 1948 because of lack of pupils, but re-opened two years later as Corio school. It is on the Victorian Heritage Register. A technical school opened in 1960 and a high school and three more primary schools opened between 1960 and the early 1970s as the Commission's housing estates were built. The technical school is now a P-12 college and trade-training centre. The high school site is used by Scope Vic for people with disabilities. The Corio Village shopping centre (1973) has a discount department store, two supermarkets and over 90 other shops. There are five large reserves with sports facilities, Beckley Park having greyhound and harness racing facilities.

A sixth reserve is the Shell Employees Recreation reserve, a testament to the importance of the Shell Oil Refinery, which dominates the coastal skyline. Near the refinery there was the Corio whisky distillery (1928-80) whose product was sometimes compared with gasoline.

The Princes Highway runs south-west through Corio, dividing the refinery area on the beach side from Corio's residential area. The Bacchus Marsh Road runs from north to south through Corio and, since 2009, Princes Freeway/Ring Road has encircled Corio's north and west sides. During the planning and construction of the Ring Road several warehouse-type shopping areas have opened along the old Princes Highway, including Homemaker and Bunnings.

Corio has had census populations of:

*of whom 673 persons were at Geelong Grammar School.
At the north-west of the Corio suburb, and near the bulky-goods stores and Beckley Park, there is the Rosewall locality which has a State primary school. 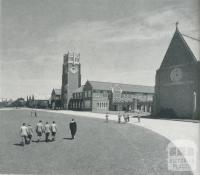 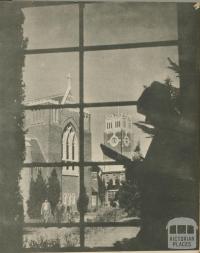