Youanmite is a rural village and district in northern Victoria, 17 km west of Tungamah and 47 km north-east of Shepparton. Its name is thought to be derived from an Aboriginal word meaning hill. The nearest hill, however, is 7 km to the south-east.

The Youanmite district was quite widespread, as schools were opened at Youanmite (1881), Youanmite North (1888) and Youanmite South (1918). When the railway line was opened between Dookie and Katamatite in 1892, a Youanmite township developed around the railway station, and a fourth school was opened in the Anglican church hall.

Youanmite was a farming and dairying district shortly after the turn of the nineteenth century, with three churches, a creamery and butter factory, a sawmill, a hotel, a store, a post office and the schools already mentioned. The flat land has good chocolate soil. Youanmite is about 5 km east of the East Goulburn Main (irrigation) Channel. The school had thirteen pupils in 1998 and closed in 2000.

Youanmite has a hall and grain silos where Youanmite Road crosses the former railway line (closed 1986). Of its three churches, the Presbyterian closed in 1966 and the Catholic continued at least until the mid-1990s.

Youanmite's census populations have been: 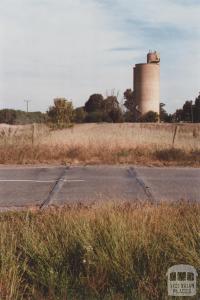