Wyuna is a rural district in northern Victoria, 5 km south of the Murray River and 12 km north of Kyabram.

The name was that given to a pastoral run taken up by M.F. Scobie in 1842. It is thought to be derived from an Aboriginal word meaning clear water.

Wyuna is situated in an irrigation district supplied by the Waranga-Goulburn system. Closer-settlement irrigation blocks were made available in 1906 and by 1908 schools were opened at Wyuna, Wyuna East, Wyuna South and Wyuna West. The first school (1906) had been in an Anglican church transported to Wyuna from the Echuca Village settlement.

The Victorian municipal directory recorded that Wyuna had two stores, a hall and Catholic, Methodist, Anglican and Presbyterian churches (1933). The street grid remains but facilities have been reduced to a CFA station, one church building, a hall and a reserve. All four schools were closed between 1946 and 1949 and pupils taken by bus to the Tongala consolidated school. Most farms run stock on irrigated or dry-land pasture.

Wyuna's district census populations have been: 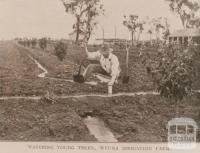