Wunghnu is a rural township in northern Victoria 7 km south of Numurkah, on the Goulburn Valley Highway and railway between Shepparton and Numurkah. It is situated on Nine Mile Creek in the Murray Valley irrigation area.

In 1873 when pastoral runs were being subdivided for farm selections, a government surveyor, Alfred Leahy, surveyed a number of proposed townships in the district, including Wunghnu. It is thought that the name was derived from an Aboriginal word meaning boomerang. The township is on a boomerang-shaped bend of the Nine Mile Creek, which was a bi-annual camping place for Aborigines.

Land sales occurred in 1877, by when a bark store and hotel were built. A school was opened in 1877. In 1881 the railway was extended through Wunghnu, from Shepparton to Numurkah, initiating a short period of development. In 1903 the Australian handbook described Wunghnu:

The two-storey mechanics' institute (1890) included a grand stage and hall, a reading room and a pool room. It is listed on the Victorian Heritage Register.

Wunghnu was an active district commercial centre until after World War I. At that peak it had two stores, two butchers, two fruit shops, a newsagent, a produce merchant and a flour mill. Its decline to a smaller town came from its proximity to Numurkah, where for several years the railway line terminated.

Wunghnu is situated in a mainly flat irrigation area, with scattered woodland along the Nine Mile Creek and to the east of the town. There are two swamps to the north-east. The school and a church are north of the creek and most of the town is to the south, which includes a reserve with two ovals, a bowls club, tennis courts and the mechanics' institute which has been restored as a tavern and restaurant. The school had 7 pupils in 2014.

In 2014 three fires north of Shepparton, in the Wunghnu, Numurkah and Bunbartha area, merged into one bushfire over 12,000 hectares in size. It killed stock, destroyed homes and burnt out farming equipment.

Wunghnu's census population have been: 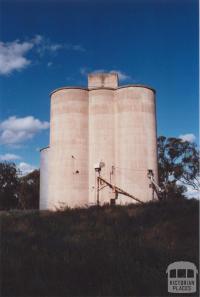