Whitfield, an agricultural village in the King River valley in north-east Victoria, is 47 km south of Wangaratta and 170 km from Melbourne. The village is immediately west of the flood prone King River and has state forest to its west and east. Agriculture extends along several stream valleys which are tributaries of the King River.

The name is probably a contraction of Whitefields, which was a pastoral run taken up by a William Clarke in 1845 (not William ‘Big’ Clarke, Port Phillip's most famous squatter). Although there are several Whitefields and Whitfields in British gazetteers, the most likely origin of the name was seasonal white groundcover flowers at Whitfield.

The land along the King River was suitable for growing many types of crops, and tobacco and hops were among the most productive. Schools were opened along the Whitfield part of the valley during the 1880s. A church was opened at Whitfield in 1887 and a narrow gauge railway line from Wangaratta to Whitfield ran from 1899 until 1953. A mechanics' institute and hall were opened in 1902 and within a few years a government tobacco research farm was transferred to Whitfield from Edi. In 1911 the Victorian municipal directory described Whitfield as a favourite tourist resort in the beautiful and fertile King Valley. It had a mechanic’s institute, two churches, sawmills, a cordial factory, a coffee palace and a hotel.

Whitfield, along with Cheshunt, King Valley and Edi, became one of the four localities in the King Valley area which grew tobacco. Large numbers of Italian, Yugoslav and Spanish farmers or sharefarmers entered the tobacco growing industry during the postwar years. In King Valley, 10 km north of Whitfield, 82% of the farms were owned by Italians in 1978.

Since the late 1970s tobacco growing has declined. (Total farm areas in Victoria fell from 3436 hectares (1978) to 1240 hectares (1994).) Some land has been taken for wine grape growing. Brown Brothers, Milawa, have expanded their vineyards to King Valley and Whitlands. Tobacco farmers have diversified into chestnuts, hops, berries, timber veneer trees and grazing.

Whitfield has a district school (33 pupils, 2014), three churches, two general stores, a community health centre, a golf course, a hotel and a caravan park. It is at the junction of roads from Mansfield and the upper reaches of the King River, and attracts campers and tourists. The memorial hall and an avenue of honour are on the main road.

A field of tobacco, Healesville, 1908 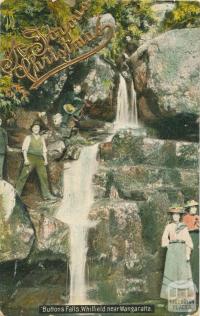