The Western District is generally defined as the area bounded on the west and south by the South Australian border and the Bass Strait coastline respectively. The northern boundary is an irregular line skirting the southern terrain of the Dividing Range. The line lies south of Ballarat, loops northwards to Beaufort and then southwards around the Grampians. Between there and the border the line extends to Harrow on the Glenelg River, but Edenhope (further north) is generally considered to be in the Wimmera region. The easterly boundary is the Geelong region, and further east there is the Bellarine Peninsula. The peninsula’s land forms and pastoral history are similar to the Western Districts’ but is described separately.

The Western District’s main geographic feature is a volcanic plain of comparatively recent origin. The plain runs from the Geelong region to west of Portland. It extends beyond the Western District’s northern boundary in parts and its southern boundary is generally a line between Colac and Warrnambool. It’s most visible land forms are cones, craters and lakes. Many of the cones are prefixed ‘Mount’, important examples being Mount Elephant, Mount Noorat, Tower Hill and Mount Eccles. Some lakes lie in volcanic cones but Lake Corangamite (Victoria’s largest) receives water from the volcanic plain’s undeveloped drainage system. It is salty, and freshwater lakes are in the minority.

The typical vegetation of the volcanic plain was temperate grassland or grassy Eucalypt woodland, ideal landscapes for livestock grazing. Once extensive, by 2010 less than 5% of the plant communities remained, and patches in good condition were probably less than 1%. Most were less than 10 hectares in size, susceptible to weed and feral animal invasion, and were habitats for rare and endangered species such as legless lizards, moths and orchids.

South of the volcanic plain lies the Otway Ranges. They extend from the Geelong region to near Warrnambool, ending at Cape Otway. The cape is a dangerous coastline. It has a harbour at Apollo Bay, and the next port in a westerly direction is found at Warrnambool. Much of the intervening area is touristically named Shipwreck Coast. There then comes Port Fairy and the best harbour at Portland. The other Western District land forms include the Dundas Tableland, around Balmoral and Coleraine, and the former sea bed area at the extreme west. It is characterised by swampiness from undeveloped drainage systems.

Victoria’s first permanent European settlement occurred in 1834 at Portland, where the Henty family came from Tasmania. The Hentys quickly settled northwards, having been told of good sheep pastures around Coleraine when encountered by Thomas Mitchell, the New South Wales Surveyor General in 1836. Mitchell travelled south-west, through Harrow, Casterton and Dartmoor, along the Glenelg River to Nelson and then to Portland from where he returned via Hamilton and Dunkeld. Settlement also occurred at Port Fairy and Warrnambool from where some pastoral expansion took place. The vast preponderance of pastoral settlement, however, came from the direction of Port Phillip. By 1844 most of the volcanic plain and table land were occupied by pastoralists.

Occupation came at great cost to the Aboriginal inhabitants. Estimates of the pre-European population reliably vary between 3000 and 6000 people. Within seven years of the Hentys’ coming a Protector of Aborigines was appointed to care for the remnant population. Evidence of Aboriginal occupation is widespread, and the remains of stone hunts and fish traps at Lake Condah are important.

Intensified settlement of the Western District was hastened by the mining of gold in the Ballarat and Bendigo areas. Mutton and beef on the hoof were driven to goldfields butcheries and a gold escort route was surveyed through Harrow. Several tracks were surveyed from Portland. Dunkeld and Nelson townships were surveyed in 1851 and in the next two years 40% of the Victorian towns surveyed were in the Western District. They included Camperdown, Casterton, Digby, Heywood, Lismore and Skipton.

The development of towns, though, was less pronounced than the growth of pastoral estates. The predominantly open plain or lightly timbered landscape, set in an area of reliable rainfall, was an ideal sheep walk. It was also ideal for horseback hunting, steeple chasing and the acclimatisation of rabbits, hares and foxes. They soon spread to become the graziers’ enemies. Many of the pastoralists were from a Scottish Presbyterian tradition, attracted to building solid and expansive homesteads when they secured tenure of their lands and put down roots. Pastoralists developed lifestyles imitative of ‘back home’. In 1862, south-western Victoria, led by a Henty, petitioned for separation from Victoria.

The after-gold land selections touched the eastern area of the Western District, but it took the expansion of the railways to add the necessary population pressure for the subdivision of some pastoral estates. In 1876-77 railways were extended from Geelong to Colac and from Ararat to Hamilton and Portland. In 1884 a line to Casterton was opened, and in 1888-90 lines were opened from Camperdown to Terang, Hamilton to Coleraine, and Warrnambool and Port Fairy were connected to the network.

By the 1880s advances in refrigeration and the settlement of families on small farms made dairying a viable activity. It was strong around Colac, where volcanic ash in the Warrion Hills was prolifically fertile, and dairying selections were cut out of the Otways around Cobden and Timboon. Potatoes and onions were grown there, and in the Tower Hill and Koroit districts. The small farming communities were predominantly Irish Catholic.

Apart from the Scots and the Irish, German Lutherans emigrated from South Australia and settled around Hamilton. Nearby Hochkirk was nearly all German. It was renamed Tarrington during World War I.

After the misery of the 1890s Depression, rural closer settlement was taken up. The Wando Vale property north of Casterton was the first, divided into 66 farms in 1900.

After World War I soldiers were settled on farms subdivided from several large estates. A good many were unsuccessful except where the land was fairly fertile and the rain was reliable. Rabbits were a problem everywhere. Local creameries were superseded by dairy and butter factories, many of them cooperatives. In 1934 there were factories at Apollo Bay, Port Fairy, Warrnambool, Portland, Cobden, Colac, Noorat, Camperdown, Coleraine and Framlingham. A factory at Condah was for farms formed from draining of the Condah swamp. Industry rationalisation reduced factory sites, and a factory at Simpson serves the dairy farms created by clearing the giant Heytesbury forest in the Otways.

After World War II all the remaining large estates were affected by soldier settlement. The large soldier settlement centres in the Western District were Balmoral, Casterton, Hawkesdale, Mortlake, Skipton and Terang. The period coincided with improved pastures and postwar prosperity, but declining world and domestic prices for wool and, in some instances, beef have forced farm amalgamations and depopulation.

The Western District is traversed by the Princes Highway, the Hamilton Highway, and the Glenelg Highway which runs from Geelong to Hamilton. Although Hamilton has been a hub of the Western District with radiating roads and railways, it has been overtaken by Warrnambool, Colac and Portland which are on the Princes Highway. Warrnambool has large dairy factories, functions as the Western District’s service centre and benefits from tourist spending along the coast. Portland has a deep water harbour for transporting bulk produce. Colac is also a service centre but is positioned between the larger Warrnambool and Geelong.

As well as its coastline the Western District has an extensive array of sites for cultural tourism. Port Fairy, Portland, Harrow and Camperdown have many buildings and sites on historic building registers, the first two towns having preserved some particularly old structures through having an early burst of growth and lapsing into colonial decline when their maritime functions shrunk. Despite the subdivision of squattocracy’s giant estates, many homesteads have survived. They and their families have been chronicled at length, and Margaret Kiddle’s Men of yesterday (1961) describes them well. Kiddle was fortunate in choosing an immigrant grazier who had hoped to make a pile and return home but instead found had put down roots.

James Boyce, 1835: the founding of Melbourne and the conquest of Australia, Collingwood, 2011 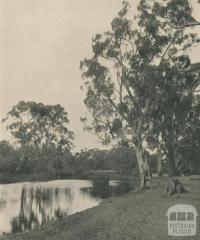