Werribee South is a rural area on alluvial land at the southern end of the Werribee River where it enters Port Phillip Bay. It is situated on the east side of the river and extends further eastwards to Point Cook. (The other side of the river is Metropolitan Farm, a sewage treatment site.)

The area was part of the large Chirnside Werribee Park estate (1860s-1890). The descendants of Andrew Chirnside gradually dispersed the estate, predominantly used for sheep grazing, first by having tenant farmers and later by freehold sales. In 1904 the State Government purchased 9400 ha in Werribee South for closer-settlement farming, but mistakenly subdivided the land into lots which were not viable. The mistake was corrected by the enlargement of the lots (1909) and the provision of irrigation to supplement the area's relatively low rainfall.

In 1912 the State Rivers and Water Supply Commission established the irrigation settlement – Werribee Estate – drawing water from the Werribee River and the Pykes Creek and Melton reservoirs upstream. The farms proved ideal for orchards, poultry, lucerne crops and dairying, and had good proximity to metropolitan markets.

After World War I, soldier settlement farms were provided, along the access way named Diggers' Road. The community centre was the Diggers Hall. In 1928 a primary school was opened in the hall, 12 years after the district's first school had been opened 2 km eastwards in Duncans Road, on the Werribee Estate.

During the 1920s Italian, pre-dominantly Sicilian, immigrants were employed on soldier-settler dairy farms and took up tenant farming on the Catholic church's Corpus Christi property on Werribee Park. They later acquired dairy holdings and changed them to market gardening. Despite antagonism from Anglo-Celtic farmers and the internment of some Italians during World War II, the Italian community survived. The Federal Labor Minister, Arthur Calwell, and Archbishop Mannix were supportive.

Werribee South's market gardens continue to be a significant source of fresh produce. The Diggers Road school was renamed Werribee Park, but both the Werribee Park and Duncans Road schools have closed (1993, c1997). St Mary's Catholic Year 9 school is nearby. A farm supplies and general store serves the district, and an urban settlement is at the very south at the mouth of the Werribee River.

There are jetties at the river mouth, a marina, a recreation reserve and a caravan park.

A marina development, Wyndham Harbour, was planned in 2014 to transform the Werribee South Foreshore into a mix of retail and residential elements. The marina development would also deliver 10 hectares of new parks and wetlands, coastal walk and bike paths and two new beaches.

Werribee South has had census populations of:

At the 2011 census, vegetable growing accounted for 19.9% of employment. 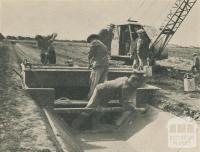