Walwa, a rural village on the Murray River in north-east Victoria, is east of Lake Hume and 30 km north-west of Corryong. It was named after the Walwa pastoral run (1839), and the name is thought to have derived from an Aboriginal word describing a place of waters.

Among the earliest references to Walwa is prospecting for tin ore in 1882-83, but it was agriculture that formed the initial permanent settlement. A school was opened in 1887. The Walwa Tin Mine was about 2 km west of the present village. Although described in the Victorian municipal directory (1910) as a mining township on Walwa Creek, the directory also recorded two cheese factories, an indication of the dairying and grazing potential of the district. There were also a hall, a store and a wine shop.

By the 1930s a butter factory had replaced the cheese factories and there were also two churches and a recreation reserve. Walwa’s position on the Murray Valley Highway gave it exposure to passing traffic, sufficient for a hotel and a boarding house. A bush nursing centre was opened in about 1933. A new bush nursing centre opened in 2006.

Walwa has a golf club, a recreation reserve, a riverside tourist park, a hotel, a general store and an art/craft gallery. There are also a hall, a medical centre and Catholic and Uniting churches. The Anglican church closed in 2005. Walwa’s primary school had 24 pupils in 2014.

Floodwaters surrounded Walwa after the Murray River rose rapidly in March 2012. Residents were evacuated and took refuge in the town's hospital. 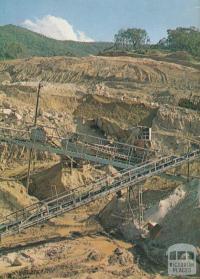