Trafalgar is located in west Gippsland, 120 km east of Melbourne. The Strzelecki Ranges lie to the south, and to the north is the flat farmland of the former Moe swamp.

Land was selected in the district, known as Narracan, from 1875. In 1878, the railway into Gippsland was constructed and the railway station became the focus of a settlement. As there was already a township of Narracan about 13 km to the south, a new name was sought. The next town to the west was named Waterloo, so Trafalgar, also commemorating a great British military victory, was chosen. Several streets in the town are also named from British military history.

A township quickly developed with stores, hotels, post office, banks, school, churches and mechanics’ institute hall. By 1881, there were 207 inhabitants in the area.

In 1888 work began on draining the Moe swamp. The bed of the Moe River, running from west to east, was deepened and widened, and a number of subsidiary channels constructed. In 1895 a village settlement was formed, to the north and north-east of the township. However, few settlers were successful. Further drainage works were required and it was 1899 before the first allotments were sold.

Severe floods in 1900 and 1901 necessitated further improvements to the drains. Settlement progressed, with the establishment of a school at Moe swamp in 1902. The district was soon known as Yulungah and finally by 1908 as Trafalgar East. The development of the swamp stimulated the growth of Trafalgar. The Australian handbook described Trafalgar’s progress in 1903:

Many new shops were built along the main street. In 1901, there had been 30 dwellings in the town; by 1911, there were 256. Trafalgar was part of the Narracan shire, formed in 1878. In 1909, Trafalgar became the administrative centre, taking over from Moe to the east.

The main crop on the swamp was potatoes, but periodic flooding caused their production to decline. The worst floods were in 1918, 1934 and 1977. By the 1930s, dairying was the most important activity in the district. A co-operative butter factory, supplied by outlying creameries, had been opened in 1891. In 1920, a rival company, Trafalgar Milk Supply Depot, began operations. The co-operative closed in 1942. The Milk Supply Depot was bought out by a large company in 1943 and operated until 1988.

Saleyards were established at Trafalgar from the early days, for cattle, pigs and particularly horses. In 1911, a market building was constructed for the sale of farm produce and agricultural requirements. Later sales were principally of beef cattle, with some calves and sheep.

By 1933, there were 1216 residents in Trafalgar. Population declined a little in the 1950s, but since then grew steadily. In the postwar years a sawmill was established, as well as a number of light industries and clothing factories. The late 1950s saw improvements such as the swimming pool (1960), a new Presbyterian church (1959), an infant welfare centre and kindergarten, a Catholic school (1961) and upgrading of the golf course to one of Victoria’s best country courses. None of these has gone to waste as the population is sustained by local and metropolitan employment accessed by railway or car.

There is no longer any shopping centre to the north of the railway and in 1976 widening of the Princes Highway removed the north side of the main street. However, a modern shopping area was developed south of the highway and the town has many services, clubs and organisations. In 1994 the Victorian municipal directory described a comfortable and prosperous town with a shire office, modern infant welfare centre and kindergarten, State, high and convent schools, four churches, branches of four banks, public hall, Masonic hall, police station, tile works, sheet metal works, quarries, hotel and three cafes. There were also agricultural and pastoral societies, garden club, football, cricket, tennis, golf, badminton, bowling, rifle and swimming clubs, fire brigade, Apex, Lions and Rotary clubs.

Trafalgar was the first Victorian town outside Melbourne to set up a commercial radio station in 1928. However, Radio 3TR was moved to Sale in 1932. Since 1974 Trafalgar has celebrated the Battle of Trafalgar with pageants, parades and fundraising functions. The town publishes a monthly local news journal.

The Trafalgar office for former Narracan shire is a service centre for Baw Baw Shire (1994). In School Road there are the primary school (376 pupils, 2014) and the high school (537 pupils, 2014), an indication of fairly populous hinterlands.

Trafalgar’s census populations have been:

Trafalgar and its environs are adjacent to the rural districts of Trafalgar East and Trafalgar South.

John Adams, So tall the trees: a centenary history of the southern districts of the Shire of Narracan, 1978 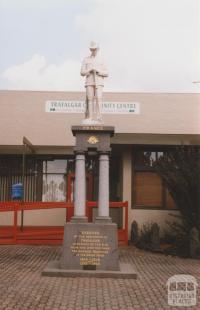