Nichols Point is a rural district in north-west Victoria, situated between the east side of Mildura and the Murray River. It is thought that the place was named after a pastoral station employee, John Nichols.

In 1887 the Chaffey brothers, irrigationists, were granted land at Mildura on condition that it be developed and sold within 20 years. Among their earliest works were the construction of pumping stations at Psyche Bend, Billabong and Nichols Point, and pumps were functioning by 1889. Farm blocks were taken up, and in 1892 the Nichols Point school was opened. 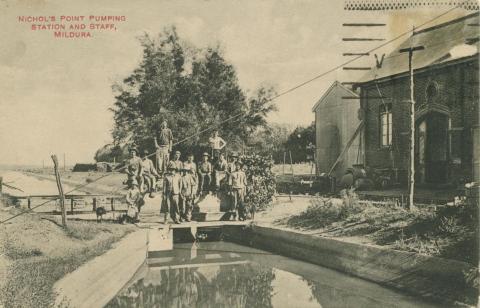