Taggerty is a village and farming district on the Maroondah Highway, 82 km north-east of Melbourne and 18 km south of Alexandra. It is in the Acheron Valley and is situated where the Acheron River crosses the highway and another road goes north-east to Thornton. The Cathedral Range overlooks Taggerty from the south.

Lying near the foot of the Dividing Range, Taggerty had land capable of being used for a pastoral run, and one was occupied in 1846, covering 20,200 ha. It was called the Taggerty Run, and the homestead built by its purchaser (1864) was called Taggerty House. The word is thought to be Aboriginal for blue clay, a local decorative pigment.

In 1870 gold was discovered in a gully off the Acheron River and worked until 1876. Two localities developed: Acheron Lower (today's Acheron), and Acheron Upper (today's Taggerty), about 9 km apart on the Maroondah Highway. The Acheron Upper primary school was opened in 1875, the year after Acheron Lower's. In 1891 a general store and butter factory were opened, as people leaving mining turned to dairying. In 1890 the name was changed to Taggerty to avoid confusion between the two Acherons. A mechanics' institute hall was built in 1898. In 1903 the Australian handbook briefly described Taggerty:

Taggerty had a mixture of farming and tourism activity, the latter including fishing, bush walking and picturesque scenery. West of Taggerty a softwood plantation was established by the Forestry Commission. Fires in 1939 and 1969 destroyed several buildings.

The village has a hall and a general store, and offers accommodation in bed-and-breakfast, farm and cabin establishments. Acheron offers similar accommodation facilities.

During the February 2009 (Black Saturday) bushfires, the town was saved by the efforts of CFA volunteers.

Village improvements included a new (silver) roof for Taggerty Hall (2014), a town park, and a walking trail from Taggerty Hall to Little River Reserve to Wylie Street (including a new pedestrian bridge over the river).

Taggerty's census population have been:

The Taggerty primaryschool continued, with an enrolment of 13 in 2014. 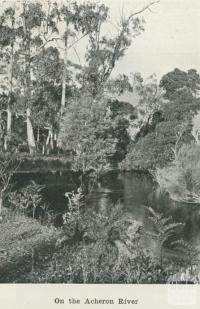 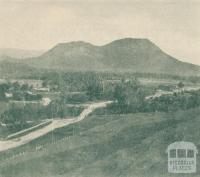 The township of Taggerty