Strathmerton is a rural township district in northern Victoria, 20 km north of Numurkah and extending to the Murray River. It is the junction of railway lines which branch to Cobram and Tocumwal, New South Wales.

The name came from a pastoral run, originally named Ulupna, which was taken up by Benjamin Boyd in 1842. Boyd renamed the run Strathmerton, Strath being Gaelic for a wide river valley and Merton being the Scottish place of residence of his father.

In 1903 the Australian handbook described Strathmerton:

During the late 1940s and early 1950s the irrigation channels and drains for the Murray Valley irrigation area reached Strathmerton and Ulupna. Kraft Foods established a dairy factory at Strathmerton in 1950. Beginning with 35 local milk suppliers, the factory took milk from 215 suppliers in 1992. The main products were all of the Philadelphia cheese and 90% of the Coon cheese produced by Kraft. The factory was acquired by Bega Cheese in 2008.

Strathmerton has recreation facilities which include a golf course, swimming pool, tennis courts and sports ovals. There are three churches, infant and pre-school facilities, a primary school (86 pupils, 2014), and a hall.

The Strathmerton district includes Ulupna which is best known for the Ulupna Island reserve on the Murray River with several river beaches and a flora and fauna reserve. It is now a dairy and grazing district. Aboriginal artefact sites found on Ulupna Island are important. In 2014 access to the Ulupna Island camping area was restricted due to the poor condition of roads and facilities.

Strathmerton’s census populations have been:

The census population of Strathmerton and environs in 2011 was 941. At the 2011 census, dairy-product manufacturing accounted for 16.4% of employment, dairy farming 15.3% and other farming 3.2%. 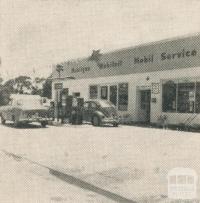