Speed is a rural village on the Sunraysia Highway and the railway line to Mildura in north-west Victoria. The nearest town is Ouyen, 38 km northwards. It was named after William, Harold and Gordon Speed, who settled in the district in 1903.

Settlement by the Speed brothers coincided with the opening of the railway line and the opening up of the Mallee lands for farm selection. The Speed township was surveyed in 1910, and within four years there were a store (1910), a public hall (1911) and a school. Settlement intensified after World War I, and the construction of channels for the supply of water for livestock and domestic use was completed in 1928. Silos were built at the Speed railway siding in about 1938, and grain storage was enlarged in the 1980s to take grain from the Patchewollock district (22 km westwards) particularly when the railway to Patchewollock was closed in 1986.

Speed has golf and tennis facilities, a public hall, a Uniting church, grain silos, a general store and fuel supplies.

Speed hosts the annual two-day Mallee Machinery Field Days. For a month in 2011 the small town was temporarily named Speedkills as part of a road safety campaign. 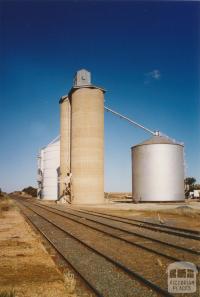