Somers is a residential and seaside town on the Mornington Peninsula, facing Western Port Bay and looking towards Phillip Island. Its sandy beach runs east to Sandy Point, and north of the point Western Port Bay has tidal mudflats and mangroves.

Somers was originally part of the Coolart pastoral run (1840), and after subdivision of the run Somers was part of a cattle property which had a homestead at the Coolart wetland, immediately to the west. The Coolart homestead underwent a succession of owners, including Alfred Grimwade (1895-1907) and Thomas Luxton (1937). Luxton succeeded in having the lagoon made a wildlife reserve in 1937.

About nine years before, Tom’s brother, the Melbourne Lord Mayor, Harold Luxton, had attended one of the annual holiday camps organised by Legacy’s Colonel Stan Savige and promoted by the Governor of Victoria, Lord Somers. The camps were warmly supported by Melbourne’s charity establishment, and in 1930 they secured a permanent area by having part of the Coolart property subdivided. At that stage Tom Luxton was not the owner of Coolart but he was on the camp’s organising committee. So too were members of the Nicholas family (Aspro), G.J. Coles and one of the Grimwades. Within a few years the area, known as Balnarring East, was renamed Somers.

Before the opening of the Lord Somers camp there had been a subdivision for beach blocks (1925), a sufficient number selling for a general store to be opened in 1929. Development flagged during the 1930s, but during World War II an air force training base was established next to the Lord Somers Camp. The base was used as a holiday centre until 1949 and as a migrant holding centre until 1958. It then passed to the Victorian Government for use as a school camp. The Lord Somers Camp and the Somers School Camp are separate operations on adjoining sites. Each has access to the Merricks Creek behind the beach foredune.

During the 1960s the holiday house and permanent resident populations of Somers increased, and the trend has continued. The small hall was used for a school (1929) and was replaced with a new building in 1957. A yacht club was established in 1962. Most of the time Stone’s general store has been the community centre, and there are a Stone’s caravan park and the R.W. Stone recreation reserve in Somers.

The Somers beach and foreshore reserve run westward to Coolart. There are also other local reserves in the township. Coolart is a State reserve of 87.5 ha. The wetland is a notable bird habitat and the homestead/mansion (1896) is on the Victorian Heritage Register.

Somers’ census populations have been:

Bruce Bennett, All our Somers: a history of Somers, Victoria, Hawthorn, 2000 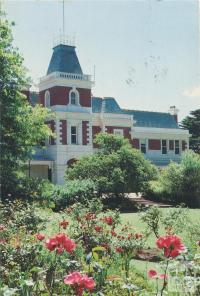