The township of Rawson is 4 km north of Erica, 34 km north of Moe and about 135 km east of Melbourne. The Melbourne and Metropolitan Board of Works built the town to house workers involved in the construction of the Thomson Dam. The first stage of the Thomson project, a tunnel linking the upper Thomson River with the Yarra valley, was completed in the early 1970s. After a diversion dam had been built on the upper reaches of the river, work began on the dam wall, in a narrow gorge some 15 km north of the township site.

The first buildings were constructed in the town in 1977. It was initially named Robertson after Alan Robertson, former Chief Engineer of the Board of Works. But, after local pressure, the name was changed to Rawson, honouring a pioneer family of the area. The township was completely planned, in a functional but attractive modern style and, because it was outside the catchment area, was designed as a permanent town. There was accommodation for 600 single workers, houses for families and a large caravan park. By 1978, there were 1800 people resident in the town.

After the dam was completed in 1983, the construction workers moved on. Rawson has a planned shopping centre in a parkland setting. There is also a recreation reserve, caravan park, Rawson Village hotel/motel, and SES, CFA and police stations. The school is south of the town and had 70 pupils in 2014.

The area is popular for horse riding, fishing, white water rafting and bushwalking, and the Erica-Thomson rail trail and the Thomson River are east of the town.

In 2014 business interests were thwarted in a move to separate the towns of Rawson, Erica and Walhalla from the Baw Baw Shire and join with Latrobe City.

Rawson’s census populations have been: 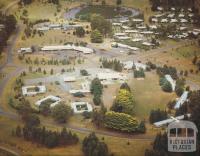