Quantong is a rural locality in the Wimmera region, 15 km west of Horsham. It was begun as an irrigation colony in 1892 in the Vectis district.

When the irrigation colony was promoted there was already a railway line to Horsham, by which produce could be transported to provincial or metropolitan markets. Irrigation water was obtained by gravitation from the Natimuk channel, and holdings of between 10 and 20 acres made up the total of about 2000 acres. The place name was derived from the numerous specimens of the quandong tree which were cleared for farming.

A Bible Christian church was opened almost upon formation of the irrigation colony, and a school was opened in 1893. A public hall was added, along with a store and an Anglican church. In 1900 the Quantong Fruit Growers Association was formed. Until the 1950s orchards grew apples, pears, stone fruits (some for drying), and melons, and there were market gardens for onions, pumpkins and tomatoes. Weakening prices and production losses caused most lines to be dispensed with, and properties were converted to dairying and fat lambs during the 1960s. Between 1918 and 1938, however, Quantong was the Wimmera’s principal area for growing fruit and vegetables.

Quantong has a public hall (c1923) and a recreation reserve. The railway line closed during the 1980s and the school closed some time later. A new community centre constructed in 2010 provided more facilities for community activities and sport.

Quantong’s census populations have been:

*and environs including Vectis 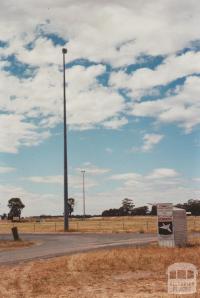