Parkdale is a residential suburb on Port Phillip Bay 23 km south-east of central Melbourne, occupying parts of the Mordialloc and Mentone postcode areas. It was named after W. Parker, an early landowner in the area, and was given when the Victorian Railways opened the station in 1920.

The Parkdale primary school was opened in 1924. Most early residential development favoured the area between the beach and the railway line. In 1933 the Victorian municipal directory described Parkdale as having a progress association, a life-saving club, a public hall, a primary school, a Church of Christ (1921) and Anglican and Methodist churches:

There was also a picture theatre in Parkers Road.

By 1933 there were over 25 shops near the railway station, mostly in Como Parade. In 1923 there had been about five shops.

During the early postwar years residential subdivisions moved away from the beach and the railway station. Near the corner of Nepean Highway and Lower Dandenong road a drive-in shopping centre was opened in 1958, constructed as shops facing a covered arcade, with parking at the rear. It followed ‘The Mall’ in Heidelberg, and pre-dated Myer's Chadstone. Named ‘Thrift Park’ it was relatively unchanged 40 years later, except for a Safeway supermarket.

In 1961 the Parktone primary school was opened and, in 1964, the high school. All of Parkdale's street configuration is grid-like, predating subdivision designs which discourage through traffic.

For many years Parkdale was a locality shared by Mentone and Mordialloc. In 1999 it emerged as a separate suburb, absorbing much of what had been considered Mentone East, extending to Warren Road. Parkdale’s largest parkland, Walter Galt Reserve (named after Mordialloc’s city engineer) is in Warren Road, along with a Catholic church and school (opposite the high school), a swimming pool, a leisure centre and the Warren Village shopping centre.

Parkdale’s census populations have been: 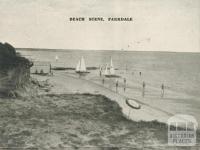 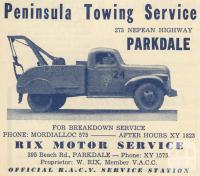