The Ovens District was an area in north-east Victoria inexactly defined, but usually considered to describe numerous gold mining settlements, principally situated on the Ovens River and its tributaries.

The river was visited by white explorers, Hume and Hovell, in 1824. They named it after Major John Ovens, private secretary to the New South Wales Governor, Thomas Brisbane.

Beechworth and Yackandandah were the chief gold mining towns, situated on the Reid and Yackandandah creeks, both of which are tributaries of the Ovens River. The Ovens directory (1857) included both these places in its pages, but also included Sandy Creek (Kiewa river basin) and Mitta Mitta (Upper Murray basin). The Ovens District thus exceeded the Ovens River basin, which is an area crossed by the river in a north-westerly direction from Harrietville to Wangaratta, entering the Murray River at Lake Mulwala. 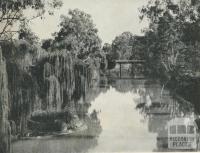 Looking towards the stock bridge over the Ovens River, Ovens Valley, 1960 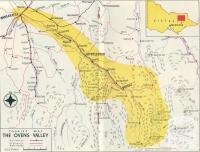 View of peaks and valleys from Mount Buffalo, 1951

Poplars, near Bright in the Ovens Valley, c1958