Ormond, a residential suburb south of the Caulfield Racecourse, is 12 km south-east of Melbourne. It is named after Francis Ormond (1829-89), grazier and philanthropist who had a strong interest in education (eg Ormond College). Point Ormond, where Glenhuntly Road meets the bay, was named after a master mariner, Francis Ormond, father of the first-mentioned.

Ormond lies north and south of North Road, which was the northern boundary of Henry Dendy's Special Survey (5 sq miles), extending inland from the sea shore at Brighton. Like much of Brighton, Ormond was agricultural during the nineteenth century, with some vineyards which were shared with neighbouring McKinnon. The railway line was extended from Caulfield to Mordialloc in 1881 and the North Road station renamed Ormond in 1897. Another railway, the Rosstown line, from Oakleigh to Elsternwick, ran at right angles to the Mordialloc line, crossing it about 700 metres north of North Road. The route can be traced in modern street directories which show Oakleigh Road and its prolongation in the form of a linear park.

Ormond underwent residential growth between the world wars, being described as a pleasant and healthy locality with extensive bay views. It had a population of 205 in 1921 and the six hectare Ormond Park had tennis courts. The park was later named the E.E. Gunn Reserve. There is a long shopping strip in North Road both sides of the railway line. In 1933 the strip had about 70 shops and businesses, and in 1950 there were about 100 premises. By the 1990s the strip had more premises than local shopping and business activity could sustain, and heavy traffic along North Road detracted from the strip's amenity. In 2014 the state government announced plans to remove the Ormond level crossing by 2017.

Ormond has Anglican, Catholic and Uniting (1903) churches, along with a Church of Christ. The Catholic primary school opened in 1924 and the Ormond East State school has been renamed McKinnon.

Ormond’s census populations have been: 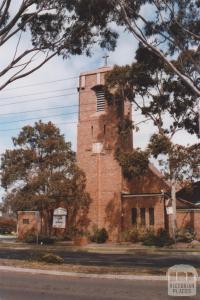