Newtown is a rural locality 3 km south of Scarsdale and 23 km south-west of Ballarat.

Gold was discovered at Scarsdale in about 1861 and there were rich yields during 1861-64. As mining extended south from Scarsdale township a second settlement, at first called Newtown-Scarsdale, was formed in about 1863. Deep alluvial mining continued strongly until the 1870s.

Newtown had its own post office, but families sent their children to the Scarsdale primary school. It was part of the Browns and Scarsdale borough (1862-1915). A Presbyterian church (1864) was generally thought to mark the boundary between Scarsdale and Newtown, and an early local history records a Wesleyan church at Newtown. There were also two hotels, several stores and a public hall.

In 1890 a railway through Newtown to Linton was opened, and Newtown became a railway junction when a line was constructed southwards to Cressy (1911-53). The Linton line, closed in 1985, became a railway trail. About 2 km west of Newtown there is a 103 metre long trestle bridge across the Woady Yaloak Creek.

Newtown is marked by a scatter of buildings, and several mullock heaps comprising part of the extensive diggings along the Woady Yaloak River valley. Its census populations have been: 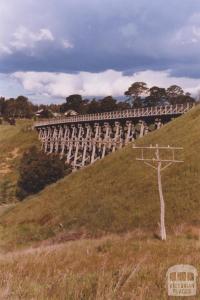