Mount William was a gold district and postal township at the foot of the Major Mitchell Plateau, at the eastern side of the Grampians. It was 35 km south-west of Ararat. In 1865 artist Eugene von Guerard painted Mount William and part of the Grampians in West Victoria, held in the collection of the National Gallery of Victoria.

The goldfield was discovered in June 1900, and within about one month there were 1000 miners. A newspaper, a hotel and temporary stores were established. Small townships named Lady Smith and Mafeking were associated with the gold field, their names inspired by the Boer War, which coincided with the peak mining period. A school was opened in 1901, running until 1910 when the attendance had fallen to 10 pupils. Mount William was described in the 1903 Australian handbook:

The gold discovery site is commemorated by a cairn (1964) in the Mafeking reserve.

Farm activity around the foothills repopulated the area so that the school reopened twice, 1939-44 and 1948-65.

Mount William and part of the Grampians in West Victoria, 1865 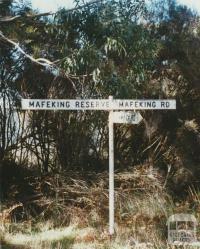