Meringur is a rural village in a remote part of north-west Victoria known as the Millewa Settlement area of the Mallee region. It is 25 km south-west of Neds Corner on the Murray River and 35 km east of the South Australian border. (The Millewa area is discussed in the entry for Mildura Shire). The name Meringur is thought to have been derived from an Aboriginal word describing a grey kangaroo.

Closer-settlement farms were taken up around Meringur in about 1925, and a school was opened in 1927. A railway line was built from Red Cliffs to Meringur in 1925. Agriculture depended on stock-water channels from the Murray River and on regularity of the sparse rainfall. Drought adversely affected dry-land cereal growing, and soil erosion blocked the channels. Farm consolidations occurred after a severe drought during 1943-45.

During the 1930s, Meringur acquired an open-air theatre, sports teams, a country race track and a golf club. During the 1950s an infant-welfare centre was opened in the CWA rooms.

In 1946 Werrimull, near the middle of the Millewa area, became something of a district centre. Meringur’s store and lands office closed in the 1970s, and the railway line was closed in 1988. Ten years later the school, with 16 pupils, was closed. Agriculturally, however, Meringur’s water supply was restored during the 1970s with the building of pipelines supplied from Lake Cullulleraine.

In addition to the post office Meringur has the Millewa Pioneer Park (1986), a collection of Mallee buildings and relics gathered by local volunteers. It is an impressive local initiative.

Bruce McLean, Rails to the Millewa North: a history of the Red Cliffs at Morkalla Railway, Australian Railway Historical Society, 1975 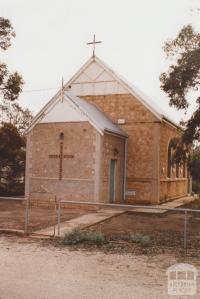