Melbourne, the capital of the colony, and then the state of Victoria, developed rapidly after the discovery of gold in and about Ballarat and Bendigo, and quickly became Australia’s largest city, overtaking Sydney in the 1880s. A port city, built around Port Philip Bay, it became the national financial centre for banking and insurance. While Sydney overtook Melbourne in population in the 1890s, when Melbourne suffered a severe real estate recession, it continued to dominate many aspects of the new federation. The federal parliament met in Victoria’s parliament house from 1901 till 1927, when a provisional parliament house finally opened in Canberra. The New South Wales parliament house, incorporating a former ‘Rum hospital’ of convict origins, simply couldn’t fit the two houses of the new federal parliament. All the major federal government departments were headquartered in Melbourne. Many did not move to Canberra until the 1950s. Melbourne’s successful bid to host the Olympic Games in 1956, not least because with the MCG it had Australia’s largest sports stadium, further added to its national and international status.

The land boom of the 1880s saw central Melbourne boast Australia’s most substantial and most elegant office buildings. Its wide and stately streets were in marked contrast to Sydney, which still reflected its rough convict origins, despite Governor Macquarie’s early efforts to clean up a fledgling city blessed with a magnificent harbour. What Melbourne lacked in its maritime setting, it made up for in grandeur and gravitas.

Melbourne became the headquarters for a host of national and international companies in the twentieth century, including BHP, Coles, Myer, General Motors Holden and Ford. Melbourne dominated manufacturing in textiles, clothing, footwear and cars. It never got a steelworks, with Newcastle and Wollongong being set up close to black coal supplies which Victoria lacked, depending for its electricity on inferior brown coal from the Yallourn Valley in Gippsland.

Suburban Melbourne developed along tram and railway lines. The tramway system, first based on cables, later electricity, serviced the city and the inner suburbs, with its longest routes to the eastern and more middle class parts of suburbia. The railway system grew in all directions; some of the early lines were the subject of corruption allegations as they suited developers, some of whom were also members of parliament.

The Melbourne municipality (Town of Melbourne), was created by Act 6 Victoria No 7 of the Legislative Council of New South Wales on 12 August 1842. Four wards were created for the election of councillors, the boundaries intersecting at Bourke and Elizabeth Streets. (The wards were the same as those chosen for the election of Market Commissioners in 1841.)

When the Anglican Bishop Charles Perry came to Melbourne in 1848 his Letters Patent referred to Melbourne as an ecclesiastical city. This is usually taken as the year when Melbourne town became a city, but the better view is that it happened in 1849, when an Act was passed in New South Wales to style Melbourne as a city.

On 30 October 1905, Flemington and Kensington borough and North Melbourne town were united with Melbourne city, adding a population of about 28,750 persons.

The city's council was governed on a ward system, each ward having three councillors elected by voters and an alderman elected by the councillors. At the turn of the century there were 32 council members. When aldermen were abolished in 1939 the municipality's wards were increased from eight to eleven, returning 33 councillors. Inner-city wards had as few as one quarter the number of voters as residential wards. The Council was protected from ward-boundary changes, however, by section 16 in the Melbourne and Geelong Corporations Act 1938 which reserved to it the initiative to change the boundaries.

The central city area was the capital's business heart, but it also contained factories and cottages. The adjoining western suburbs had residential and industrial areas, including some notable noxious industries. East Melbourne and South Yarra were residentially well-to-do.

The change from inner city manufacturing and warehousing to retailing and office use during the 1920s-60s is described in the entry on Melbourne Central City. The business sector expanded beyond the central city boundaries during the 1970s, but there was a substantial residential hinterland between there and the external boundaries. Until 1979 the Council's wards had such uneven enrolments of voters that business interests dominated the council's debates.

Threatened with the repeal of section 16 the Council reduced the wards to eight and adjusted the imbalance of voting power in 1979. During the 1970s the dominance of the business-oriented civic group had been lessened and at the end of the decade, with the changes to the wards, councillors from residential wards became more influential. On 6 May 1981, the State Government replaced the councillors with three commissioners who remained in office until the end of 1982. The commissioners sped up the issue of planning permits, in contrast to the elected council which had placed unwelcome conditions on permits.

In 1982 the Cain Labor Government reduced the wards to six, configured with a view to reducing the effectiveness of the business vote. The expected election of a solid majority of Labor endorsed candidates was frustrated by residential voters electing independent candidates, but the business vote did not secure a majority of councillors. The 1980s saw the production and implementation of a Strategy Plan which concentrated on road works, traffic works and community facilities in residential areas. The issuing of planning permits had been substantially removed from the Commissioners by the Labor Government, and the situation for the elected council continued unchanged so far as large developments were concerned. The property development community got most of what it wanted during the 1980s, as well as an unwanted glut of office space.

The business community, however, was discontented with the amount of council spending in the residential areas, and wanted more councillors from its own constituency. On 6 October 1992, the Liberal Party/National Party Coalition gained office and the councillors were for a second time replaced with appointed commissioners.

In preparation for the return of an elected council the residential areas of Carlton North, Flemington, Kensington and part of North Melbourne were severed from the municipality, and Southbank, Docklands and the Show Grounds were added in 1993. The franchise was changed by increasing the number of voters drawn from companies from one to two per company, and making their enrolment and their obligation to vote compulsory instead of optional. The business community nominated a team for all councillor positions, which were a mixture of ward councillors and councillors elected at large by proportional representation. Despite the extraordinary efforts to ‘get the numbers’ at the election in 1996, the business community's candidates mostly failed to get elected.

Among the reasons for the unwanted electoral outcome for the business community was the rush of office construction in the 1980s. Superseded office buildings were converted to residential apartments. Whereas a company might occupy one or more office floors, and under Melbourne's electoral law have two votes, a refurbished floor might have six apartments and every resident enrolled to vote. The amalgamation of small firms into conglomerates further eroded the business community's voting strength.

Melbourne was governed by a council which was debt free, having been compensated for the transfer of its electricity supply organisation to the private sector. Major planning approvals remained firmly under the supervision of the relevant State Minister, in effect guiding the main aspects of the municipality's development. The council had little if any input on the Docklands development.

The major parks and gardens traditionally maintained by Melbourne council remain its responsibility, an important element in tourism and in maintaining Melbourne's reputation as the 'world's most liveable city' (1993). The parks and gardens amount to about one quarter of Melbourne city's 38 sq km.

The municipality's residential areas have undergone gentrification and their median house prices are well above the median for metropolitan Melbourne.

To the north of the central city area there are substantial educational and medical institutions: the Royal Melbourne Institute of Technology and the University of Melbourne; and the Royal Melbourne, Royal Women's and Royal Children's Hospitals. The Prince Henry's and the Queen Victoria Hospitals were closed in the early 1990s, but the private Freemasons and Mercy Hospitals, East Melbourne, continue.

Tram and train lines converge on Melbourne and since the 1970s the Eastern and South Eastern Freeways concluded at the municipality's borders. The City Link tunnel beneath parklands and the Yarra River joined Melbourne's first (South Eastern) freeway to the Westgate Freeway. A bypass Western City Link route runs along the Moonee Ponds Creek Valley, extending from the Westgate Freeway to the Tullamarine Freeway. The nearest equivalent to an Eastern bypass route was the widening of Punt Road/Hoddle Street.

In central Melbourne the lanes and 'Little Streets' became havens of cafe culture. The cafe culture was patronised by workers and high-rise apartment dwellers. Apartments also proliferated in the 2000s in Docklands and Southbank.

Melbourne city's census populations have been:

Section of Melbourne from the air, 1934 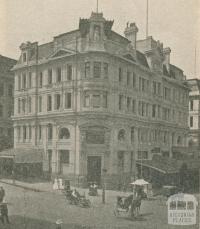 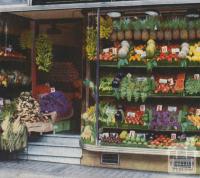 Window display in one of Melbourne's fruit stores, 1955 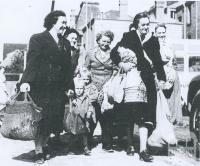 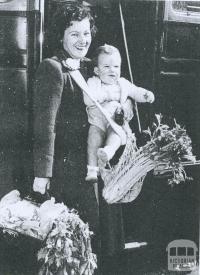 Panoramic view of Melbourne and the Yarra, 1900 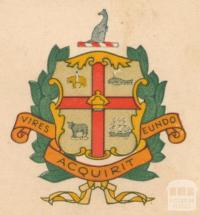 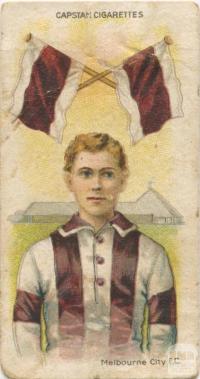