Lorquon is a rural locality in north-west Victoria, near the northern limit of the Wimmera district. It is 22 km north-east of Nhill and 20 km west of Jeparit.

Lorquon was the name of a pastoral run taken up in 1851, and it is thought that the name was derived from an Aboriginal word describing a crab hole or water hole. The Bequon (origin of ‘Loquon’) waterhole was the basis for the pastoral run.

Settlers in the district secured the opening of a school in 1883 in the Farmers’ Institute building. There were also a Bible Christian church (1882), a general store, a hotel, an implement factory and a mechanics’ institute (1889). Lorquon was described in the 1903 Australian handbook:

During the first decade of the 1900s the population tripled, and a railway line from Jeparit was opened in 1912. The station was about 3 km south of the village, and its location is marked by grain silos.

In 1970 the school had 14 pupils and it was closed shortly afterwards. The railway line closed in 1986.

Lorquon has a public hall, a Uniting church and a recreation reserve. Its census populations have been: 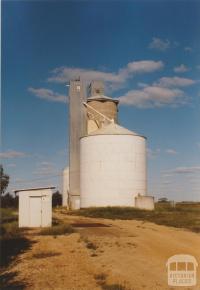