The township of Lake Tyers Beach, Gippsland, is about 340 km east of Melbourne. It is situated on the south-eastern shore of Lake Tyers, at the lake’s outlet to the sea. Lake Tyers is a submerged river valley separated from the sea by a strip of sand dunes. The outlet is usually closed by a wide sandbar, the lake occasionally breaking out following heavy rainfall.

The Krauatungalung tribe inhabited the shores of the lake, their presence evident from middens, sites for fashioning tools and scarred trees. Several locations around the lake, such as Nargun’s Cave and Devil’s Pool, hold special significance for Aborigines.

Lake Tyers was visited by Europeans in 1846 and was named after C.J. Tyers, Commissioner of Crown Lands. Soon the area was taken up as the Lake Tyers pastoral run.

In 1861 an Aboriginal mission station called the Anglican Lake Tyers Mission (Bung Yarnda) was established on the northern shore between two long arms of the lake. It was separated by 2 km of water from Lakes Entrance. Buildings were constructed and crops planted as Aborigines gradually moved to the station. A school commenced and in 1878 a church was constructed. Fruit trees were planted and sheep grazed, as well as traditional hunting and fishing. In the 1880s, professional fishers visited the lake, despite restrictions to protect the livelihood of the mission dwellers.

Tourists were also attracted by the peaceful waters and forest clad shores of the lake, encouraged by the travel tales of ‘The Vagabond’ and the scenic photographs of N.J. Caire. In 1886, the Lake Tyers Hotel was established on the eastern side of the lake and on the southern shore was Lake Tyers House, eventually a grand guest house with a dining hall seating 120 guests. Visitors enjoyed walks in the forest, fishing and launch trips on the lake, often visiting the mission station. The area became more accessible when a coach service commenced to Orbost, further east, travelling over the sandbar at the lake’s outlet.

Sawmills operated in the surrounding forests from the 1890s. A mill on the western shore transported timber to Lakes Entrance by tramway, while logs from a mill on the eastern shore were floated across the lake. Sawmills worked around the lake until the 1940s, and in 1972, 5300 hectares of forest surrounding the lake were proclaimed a Forest Park.

A glass factory was established on the south-eastern shore in 1908, utilising local quartz sand. Telegraph insulation cups were manufactured, as well as bottles and ornaments. When the contract for the insulators was lost in 1912, the factory was abandoned and little now remains to mark the site of the venture.

Land was cleared and farmed around the southern edges of the lake, but tourism continued. By the early 1900s, Toorloo House, another guest house, catered to visitors on the west side of the lake, also housing the district’s post office. A school commenced in 1918. However, the number of visitors gradually declined, particularly after a better road to Orbost was constructed to the north, skirting the upper reaches of the lake.

In the mid-1940s the Methodist Church held a camp on a site at the lake’s outlet, which was locally known as Cross’ Landing. Regular camps followed and the site was acquired and gradually developed into a well equipped camping park.

In the late 1950s housing blocks were sold in the vicinity and the settlement, known as Lake Tyers Road, soon numbered 40 houses. Gradually other estates were subdivided and many holiday homes constructed. A general store commenced business in the early 1960s and in 1970, the township’s name was altered to Lake Tyers Beach. Foreshore camping was phased out and two other camping and caravan parks cater to holiday makers. Boat ramps and jetties were constructed at several locations on the lake.

The fortunes of the mission station fluctuated over the years. Closure was proposed in the 1960s and many Aborigines moved to surrounding towns, particularly Nowa Nowa. However, in 1970 the station was transferred to Aboriginal ownership. Although the school closed, other community services have been established and farming activities have been successfully extended.

Lake Tyers Beach is a small quiet holiday settlement which, since the 1980s, has a significant number of permanent residents. Fishing and boating on Lake Tyers are the major attractions. There are a general store, a tavern and hire boats. Scenic cruises regularly ply the lake. There are walks and drives through the forest and at the mouth of the lake there are protected nesting sites for the rare little tern.

Census populations for Lake Tyers have been:

A. Goding, This bold venture: the story of Lake Tyers House, place and people, 1990 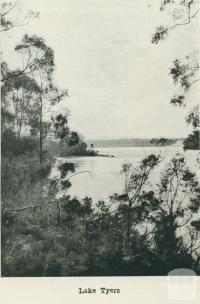 On Lake Tyers Near Lakes Entrance, 1955