Kooyong is a residential suburb 7 km south-east of Melbourne on the south side of the Gardiners Creek valley. Its neighbours are Toorak and Malvern.

Gardiners Creek was originally named Kooyong Koot Creek by the government surveyor, Robert Hoddle, in 1837. It is thought that the name derives from an Aboriginal word meaning camp or resting place, or haunt of the wild fowl. Kooyong is near where John Gardiner, a pastoralist who overlanded stock from Yass, New South Wales, built his house in the mid-1830s.

Kooyong is at the northern end of the Malvern area. Its railway station was opened in 1890, and tramlines were opened along Glenferrie Road and Toorak Road in 1913 and 1927 respectively. It is best known for the stadium occupied by the Lawn Tennis Association of Victoria, which took possession of the site in 1920, and opened the stadium in 1927. It became the venues for Australian Open and Davis Cup contests until they were moved to the National Tennis Centre, near Yarra Park, Melbourne, in 1988. Since that time the annual Kooyong Classic (restricted to eight of the world's top male players) is played at the Kooyong stadium as an exhibition tournament as a lead-in to the Australian Open Grand Slam. Kooyong is also the name of an electorate of the Australian Parliament, held by Sir Robert Menzies, 1934-66, and by Andrew Peacock, 1966-94. Menzies was Prime Minister and Peacock Leader of the Opposition, both representing the Liberal party.

Kooyong's residential stock was substantially completed by the end of the 1920s. The land which the Lawn Tennis Association acquired is in the Gardiners Creek valley and needed extensive flood-prevention and drainage works. Kooyong Park to the east is also in the valley. It has several ovals. Vision Australia (formerly the Association for the Blind) has a property on slightly higher ground. On the other side of the valley there are the Scotch College sports grounds.

Kooyong has a small shopping centre near the railway station and two other reserves, one of which is the Sir Robert Menzies Reserve on a former brickworks site.

Kooyong’s census populations have been: 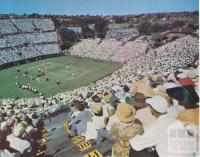 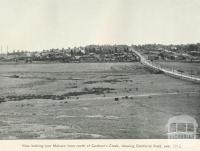