Kara Kara Shire (1884-1995) was situated around the town of St Arnaud in the Wimmera region. St Arnaud was a separate municipality, but contained Kara Kara Shire’s offices.

The shire originated as St Arnaud shire on 14 November 1864, occupying an area extending as far afield as Warracknabeal, Hopetoun, Wycheproof and Charlton. Those areas were severed as separate shires between 1864 and 1895, in the course of which Kara Kara shire was severed on 20 October 1884. Its area was 2293 sq km. The shire began with a population of nearly 5000 people, but the decline of mining and the amalgamation of farm properties resulted in a population loss of about 75% over the following 100 years.

The name Kara Kara is thought to have been derived from an Aboriginal expression describing gold and quartz.

The shire’s main transport corridors were the Sunraysia Highway and the railway line to Mildura, both passing through St Arnaud. The main village was Stuart Mill and the chief farming localities were Avon Plains, Cope Cope, Beazley’s Bridge and Tottington. The Kara Kara State Park and the Teddington Reservoir are near Stuart Mill. In 1946 the shire was briefly described in the Australian blue book: 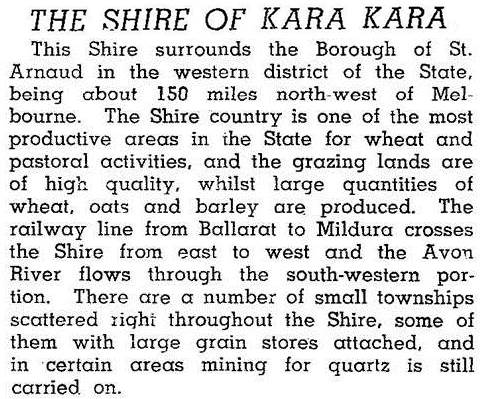 The shire’s census populations and numbers of farm holdings were:

Despite these figures the shire maintained quite a grand hall in Napier Street, St Arnaud, a National Estate conservation area.