Inglewood is a rural township on the Calder Highway about 42 km north-west of Bendigo and 7 km beyond the Loddon River.

The Inglewood district was occupied by the Loddon and Glenalbyn pastoral runs. The Reverend William Hall obtained the Glenalbyn run in 1853, and it is thought that Inglewood was named at the suggestion of his wife who came from Inglewood Forest, Cumberland, England.

The town came about from a gold discovery in July or thereabouts, 1852, west of the present township. The short-lived settlement, of which little trace remains, is known as Old Inglewood. In 1860 gold was discovered near the northern end of the present-day Market Street, (new) Inglewood, resulting in the formation of a longer-lived township. A shortage of water obliged some miners to live in Bridgewater during dry spells, but a township nevertheless grew. A reservoir was constructed by 1864.

At the peak of its early activity the Inglewood goldfield had over 10,000 miners, but the temptation of other fields reduced the number to about one third. National, Catholic, Presbyterian schools were opened in 1860-61.

On 6 December 1861, Inglewood borough was proclaimed, occupying an area of four square miles (6.4 sq km). Civic developments came rapidly during the rest of the decade: a hospital and Presbyterian church (1863), a botanic garden next to the reservoir (1864), the Anglican church (1864), a Methodist church and a mechanics’ institute hall (1865), a court house and a fire station (1866) and the present primary school building (1870). The fire station was most likely the result of a disastrous fire in 1862 which destroyed several commercial buildings. There were also two newspapers, a brewery, numerous hotels, an iron foundry, quartz-crushing mills and pumping machines to keep water out of the deepening mine shafts. By the 1870s pumping costs made mining less profitable, curtailing the industry. The reworking of mines and tailings maintained some activity into the turn of the century.

In 1876 Inglewood was connected by railway to Bendigo, and remained a terminus until the line was extended to Korong Vale in 1882. Until 1883 the borough council met in a hotel or elsewhere, and a town hall and offices were built on a former market site. The building is set in a public garden, and became the social and civic centre. It ranks with the Anglican church as the town’s most impressive building. The Anglican community was much the larger one in Inglewood, and the Catholic church waited until 1905 to replace its timber building with a brick structure. It kept its convent school, however, until 1974 and continues with lay teaching staff.

North of Inglewood there is extensive State forest. It has supported an industry which has endured longer than gold. The forest is populated by the Blue Mallee (Eucalyptus polybractea). Harvesting of the foliage for eucalyptus-oil distillation began around the turn of the century, providing employment for harvesters, distillery-plant operators and bottlers. Until eucalyptus plantations were established overseas Australia monopolized oil production for medicinal and other purposes. One distillery processed residue as an anti-rust paint marketed as Valvoline, probably a unique local industry. In 1980s Inglewood had half of the North Central region’s licensed public lands for leaf harvesting. Continual harvesting and regrowth has made the forests almost monocultural.

Inglewood was described in 1903 in the Australian handbook, a time when the township had seen its best days, was on the verge of relying on an agricultural economy and was functioning as a minor service centre for surrounding villages: 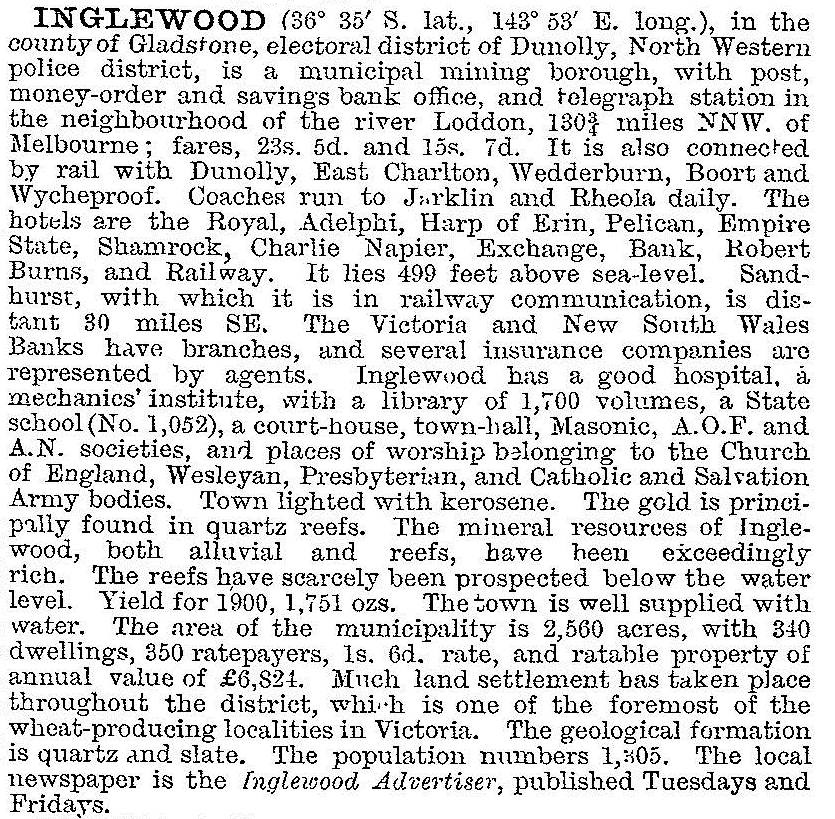 One particular result of Inglewood’s slow contraction has been the absence of redevelopment and the survival of several historic buildings and structures, although remarkably few are registered. They include former shops, hotels, halls and the newspaper office. (The newspaper’s proprietor, Julius Vogel, became a Premier of New Zealand.) Two famous residents of Inglewood were Sir Reginald Ansett (1909-81) and Maurice Blackburn (1880-1944), lawyer and Labor politician. Slightly less famous was Major-General Edwin Tivey (1866-1947) who fought at Fromelles and Belgium. His family house, a two-storey verandahed mansion, is opposite the town hall. Inglewood was described in the 1946 Australian blue book: 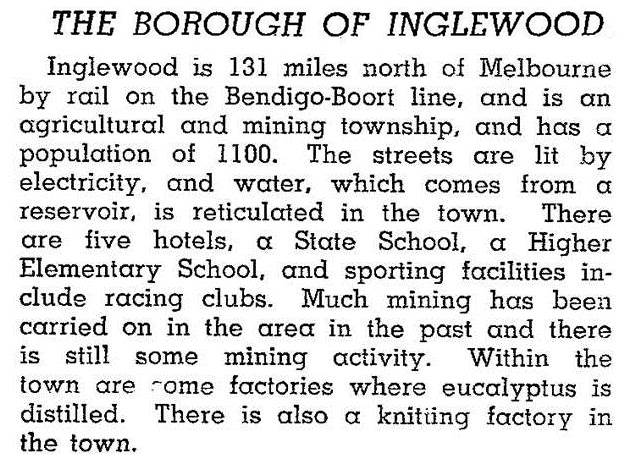 On 1 February 1961, Inglewood borough was united with Korong shire. During the 1980s the railway station was closed to all but freight services.

Inglewood’s public gardens fell into neglect, but the local Apex club has partially restored the early botanic garden. There are a golf club, bowling green, tennis courts, a swimming pool and a recreation reserve. There are also a hotel, motel, and caravan park, three churches, Catholic and State schools, a hospital and associated services which extend to Wedderburn and Charlton, and the town hall. The former court house is used by the Inglewood Historical Society. A former eucalyptus distillery, close to the town in Brooke Street, has been donated to the Inglewood community and converted to a eucalyptus museum. Inglewood primary school had 33 pupils in 2014.

Inglewood’s census populations have been:

Back to Inglewood centenary week, Borough of Inglewood, 1961 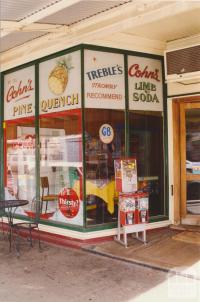 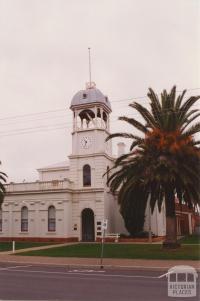