Grassmere is a rural/residential locality in western Victoria, 10 km north of Warrnambool and located west of a loop in the Merri River.

The Grassmere district was taken up for pastoral settlement, mainly for cattle, in 1839. Either the first white occupier or the second, Thomas Manifold (1842), named the pastoral run Grasmere, probably a reference to the place in the English Lakes District. In the mid-1850s some of the run was subdivided and leased to tenant farmers. This settlement brought a school, opened by the Anglican church authorities in 1858. There was also an Anglican church, 1878-1915. A hotel was opened in 1876.

In 1888 the Grassmere Cheese and Butter Factory was opened on the southern side of the river loop, away from the flood prone village area inside the loop. It became a cooperative in 1889, amalgamated with the factory at Framlingham in 1913, and was burnt down in 1966 shortly after being acquired by the Murray-Goulburn chain of factories.

Baptist and Presbyterian churches opened in 1897 and 1898, an indication of increasing population, and the last of the large estates was subdivided during 1908-10.

Grassmere continues to be a grazing and dairying area. It has a hall and a church, and the school (named Grasmere) takes pupils from beyond Grassmere. Its enrolment in 2014 was 82.

Grassmere’s census populations have been: 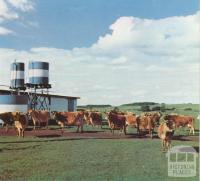