The Grampians comprise four ranges of mountains up to 1000 metres above sea level, running approximately north-south, at the westerly extremity of the system known as the Great Dividing Range. They are generally 230 km west of Melbourne and are surrounded by plains, giving them visual prominence. Their northern slopes fall towards the Wimmera region. To their east there are the towns of Ararat and Stawell, and Dunkeld is to the south.

The Grampians’ ‘industries’ include water harvesting and tourism. The Grampians are partly in a National Park (1984) of 1670 sq km. The ranges, although not particularly high, catch water from the rain bearing westerly winds. The largest ranges, Serra and Mount William (also known as the Major Mitchell Plateau) receive up to 1000 mm of rain annually. On the northern (Wimmera) side of the Grampians the rain is collected in several reservoirs, Lake Wartook (1887), Lake Lonsdale (1903), Lake Fyans (1916) and Lake Bellfield (1966). There are other storages further north. The largest storage by far is Rocklands Reservoir (1953), on the west of the Grampians, damming the waters of the Glenelg River. All the storages are for the Wimmera stock and domestic supply system.

The tourist industry is the more visible of the two. Its origins lay around Halls Gap, situated in a valley entered from the north-east of the Grampians. Fyans Creek flows along the valley, and in 1881 a weir, water fluming and tunnel were constructed for Stawell’s water supply. Stawell’s borough huts accommodated workers, and appear to have provided lodging for early holiday makers. Guesthouses and infant tourism developed early in the twentieth century and a walking track out of Halls Gap took travellers to the Wonderland wildflower and rock feature attractions. The weathered sandstone of the Grampians has produced spectacular escarpments and unusually shaped features. Other sandstone has been quarried, and it is found in Parliament House, the Port Authority building and the General Post Office, Melbourne. A specimen column is displayed at the south-east entrance to the Exhibition Building.

Valleys lie between the ranges. The largest is Victoria Valley at the south of the Grampians and outside the National Park. It is a mixture of farming and wooded wet lands. There is farming along the western edge of the Grampians. An early pastoralist in that area was Charles Carter, who between 1845 and the 1860s acquired an estate of nearly 2000 sq km. The Glenisla homestead, built by Charles’ son, Samuel, in 1873 is of Grampians sandstone. It is on the Victorian Heritage Register and is also a bed and breakfast establishment.

Samuel Carter was the first white settler to find Aboriginal rock art in the Grampians. Rock art is usually found in sheltered sites, mainly in the western Grampians. The strong Aboriginal association with the Grampians was foregrounded with the opening of the Brambuk Interpretive Centre at Halls Gap in 1990. There was a short lived movement towards applying Aboriginal names to some Grampians places during the last years of the State Labor Government around 1992. Gariwerd was the name chosen for the Grampians and Budja Budja was chosen for Halls Gap.

Until the declaration of the Grampians National Park in 1984 the area was managed by several public authorities. The most important was the Forests Commission which tried to balance timber harvesting and conservation: the Commission placed increasing emphasis on conservation and recreation towards the end of its tenure of an area of 2100 sq km of State Forest. Another conservation player was Walter Zumstein who acquired land near Lake Wartook before World War I. He developed a landscaped camping and native animal ground which, in a modified form, continues to draw visitors. 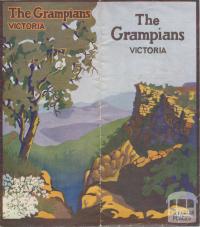 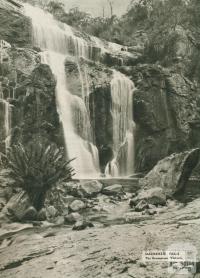 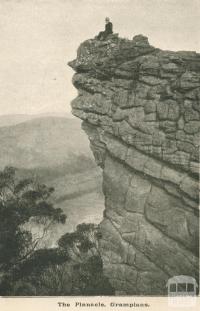 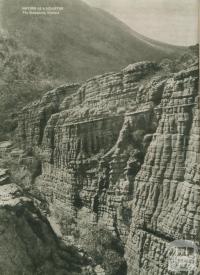 Nature as sculptor, The Grampians, 1954

The Flume, Hall's Gap, The Grampians, c1920. Part of the water supply to Stawell 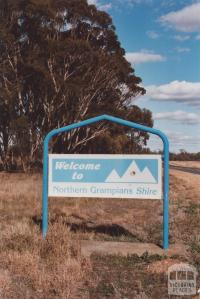 In the Grampian Mountains near Horsham 1951 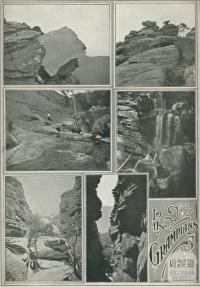 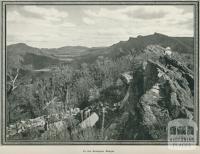 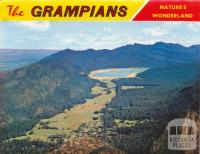 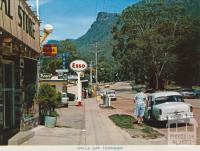