Golden Beach is a coastal town on the Ninety Mile Beach, 31 km south-east of Sale. It is reached by the road from Sale to Loch Sport, Gippsland Lakes.

Golden Beach began as an estate marketed by Willmore and Randell in the late 1950s, one of several coastal developments projected to be as successful as Queensland’s Gold Coast. ‘Victoria’s Riviera’ was predicted to yield property investments like the Gold Coast’s.

Among the numerous promotional attractions of the 1960s the one that has lasted is surf fishing. The annual Golden Beach surf fishing competition is held each Easter. Bass Strait water is seldom warm enough for swimming and the waves can be boisterous. Some allotments were later found to be flood prone.

Electricity was connected in 1971.

Golden Beach has a golf course, a recreation reserve, a hall, a general store and real estate agencies. In 2011 the census recorded 568 dwellings, of which 164 were occupied on census night; most places are weekenders. Golden Beach’s census populations have been: 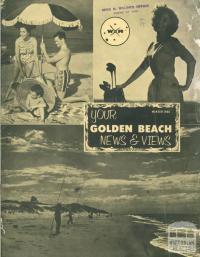 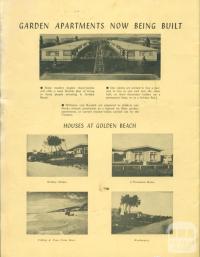