Glenroy is a residential suburb 13 km north of central Melbourne, bounded on the west by the Moonee Ponds Creek, on the south by Pascoe Vale and Oak Park, on the west by Hadfield and on the north by Broadmeadows. It contained Hadfield and Oak Park until 1999 and 2003. Its name came from the Glenroy pastoral run occupied by Duncan Cameron from Glen Roy, Scotland. Cameron was one of several Scots farmers in the district whose tenure is still visible in the bluestone Scots church at Campbellfield.

Toorak of the north

The area occupied by today's suburb was held by the Kennedy family, also from Inverness, Scotland, who arrived in Port Phillip in the mid-1840s. One of the family properties was Glenroy Farm, located immediately east of the railway line (1872) and accessed by a private level crossing along the alignment of the present day Glenroy Road. In 1874 Glenroy Farm and adjoining Kennedy properties were sold, and on-sold twelve years later at much profit to the Glenroy Land Co, which marketed it two years later as the Toorak of the North. The promoters built three double-storey shops in Wheatsheaf Road, fitted out a hall and paved some roads. The land sales were ahead of their time, although a few fine residences were built. There were 40 houses in Glenroy in 1891, including that of Arthur Wiseman, one of the promoters. It survives as Wiseman House in Widford Road, near the Anglican church.

Glenroy was described in the 1903 Australian handbook:

A primary school was also opened in 1891, virtually the last ‘improvement’ for several years until the Church of England constructed a modest building in 1908. The general vista of paddocks was broken by the Essendon Golf Club buying land for the Northern Golf Club course in 1912. A few more buildings were constructed so that the total for Glenroy (including Hadfield) was 210 in 1939. The suburb's desirability was tarnished, however, when the late Albert Wiseman's daughter was murdered in her house by an intruder in 1938. She had been a prominent and generous member of the community.

After World War II Australian National Airways sponsored housing for its employees in Glenroy West (1946) and the War Service Homes Commission began building on the other side of the railway line in 1950. The following year the Housing Commission took control of 2226 hectares of land in the Broadmeadows municipality, including Glenroy north, for housing. Between 1953 and 1957 the Commission completed about 1700 houses in Glenroy and Jacana (the railway station next after Glenroy). Housing in Glenroy south proceeded at a similar pace. The momentum can be assessed from the rate at which the shopping centre changed and schools were opened. From about ten shops at the end of the war there were over 50 in Glenroy within ten years. The history of schools in the present suburb of Glenroy is as follows:

Hadfield was in east Glenroy, adjoining the rear boundary of the Fawkner cemetery. It was named after a locality west of Manchester, England. It is superimposed on three previous place names: John Pascoe Fawkner sold the Hadfield area in subdivided form in 1850, naming it Box Forest; subsequently it was the Mt Sabine estate on which a primary school was opened in 1923; the school was named Westbreen (West and Breen being local bus proprietors), and there is a Westbreen hall near the school. The post office has been removed from a reduced Westbreen shopping centre. The Hadfield shopping centre and post office continue, aided by a Safeway supermarket, but the primary and high schools were closed during the early 1990s.

Gowrie is the name of a railway station (next after Fawkner station), and there is a State primary school. Gowrie Park was a pastoral property owned by James Robertson from Gowrie, England.

Jacana, in Glenroy north and Broadmeadows, had a similar status to that of Gowrie with a station and a primary school, but is now a gazetted suburb.

Glenroy's shopping centre continues to be an active one near the railway station, with a market and a small strip in Wheatsheaf Road. The shopping centre includes a bus interchange at the station, a Council library and an office of Moreland City Council. There are reserves along the Moonee Ponds Creek at Glenroy West, several smaller neighbourhood ones and a reserve beside the Western Ring Road, which forms Glenroy's northern border.

Glenroy's census populations have been:

Among the languages spoken at home by residents at the 2011 census there were:

Judith A. Faulds, Time to till: a history of Box Forest and Glenroy in the 19th Century, 1990 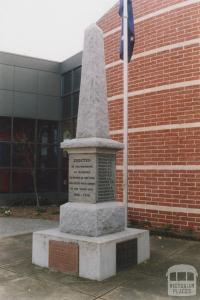