The Gippsland Lakes, in eastern Victoria, consist of a series of shallow coastal lagoons enclosed by sandy barriers, the outer barrier forming the Ninety Mile Beach. The largest lakes are Wellington, Victoria and King. The main lakes cover 340 sq km, with a shoreline of 320 km. Several rivers feed the lakes system which has a surface area of about 360 sq km. At the time of European settlement, the outlet to the sea was at the eastern extremity of the lakes, about 6 km from the present entrance.

The watersheds of the rivers feeding the Gippsland Lakes extend from Noojee to Omeo, and several large towns are on their shorelines. Travelling from west to east there are:

Lake Tyers, 10 km east of Lakes Entrance and not part of the lakes system, is fed by several short streams.

The Tatungalung tribe inhabited the shores of the lakes which provided plentiful food. A number of landmarks around the lakes feature in Aboriginal myths. The lakes were found by explorer Angus McMillan in 1839 and squatters soon established pastoral runs around the shores. Relations between Europeans and Aborigines were not always friendly, and by the 1860s most of the surviving Aborigines were removed to mission stations at Ramahyuck near Lake Wellington and at Lake Tyers, to the east.

The lakes' outlet to the sea was found by John Reeve in 1842 but it was 1858 before a ship sailed through the shallow opening. Despite the hazards of the changeable entrance, a thriving shipping trade soon developed. Vessels from Melbourne, Sydney and Hobart navigated the lakes and the main rivers, particularly to the developing towns of Sale and Bairnsdale.

However, the vagaries of the shifting entrance prompted plans for an artificial entrance. Work eventually began in 1872 at a location west of the natural entrance but ceased several years later. Sir John Coode, renowned harbour engineer, recommended the construction of two long piers through the sand dunes and the excavation of the sand between. Work resumed in 1881 and in 1889 a severe storm broke through the remaining sand, opening the entrance. Initially low-lying land was flooded, before the lakes stabilised at a lower level. A deep channel was scoured, greatly improving access, but a sandbar developed outside the entrance creating new hazards. The natural entrance was rapidly silted over.

The shipping trade in the lakes flourished, with supplies for the towns and gold mining centres such as Omeo being imported and timber, farm produce and fish being exported. Commercial fishing commenced in the lakes in the late 1870s. Small settlements of fisherfolk developed at Paynesville, Metung and Lakes Entrance. Over the years catches declined, variously attributed to overfishing, infestations of crabs and disappearance of eel-grass beds.

Paynesville still supports a lakes fishing fleet but at Lakes Entrance most boats fish offshore in Bass Strait. The largest fishing fleet in Victoria is now assisted by sophisticated technology. A channel has to be regularly dredged through the sandbar outside the entrance to maintain access to the open sea.

From the late 1870s the Gippsland Lakes attracted numerous visitors. A few wealthy families already had summer residences around the shores, but with the advent of the railway (1887-88) from Melbourne tourists could board steamers at Sale or Bairnsdale for a trip down the lakes. Many hotels and guesthouses were established in the lakeside towns to cater for this influx. However, from the 1920s motor transport became more accessible and by the 1930s the steamer services ceased. But the lakes remained popular with tourists, attracted by the scenery, mild climate and good fishing, and the holiday resorts have experienced great development. Another resort, Loch Sport, was established on the southern shore of Lake Victoria, with residential blocks selling during 1954-70.

In the 1920s oil was found at a number of bores sunk around the eastern end of the lakes. There was renewed interest in the area in the 1940s and 1950s but development did not proceed after payable oil fields were discovered offshore from the 1960s.

Time has shown that the opening of a permanent entrance changed aspects of the lakes' ecology. Increased salinity caused dieback of vegetation, shore erosion, spread of salt marshes and changes in fish species. Algal blooms appeared in the lakes periodically from the 1960s. A study in 1999 showed that the lakes had high nutrient loads, low flushing rates and Lake Wellington had very murky sediment. Development around the lakes is increasingly regulated, controlling housing subdivisions, land use and pollution from boats, camps, agriculture and industry. Much of the coastal barrier is protected by National Park status and the Lakes are a Ramsar international wetland. The Gippsland Lakes provide an important scenic and recreational resource and support important fishing and tourist industries, but it is now recognised that the health of the lakes system is paramount.

Census populations for some of the main towns on the Gippsland Lakes have been:

E. Bird, A geomorphological study of the Gippsland Lakes, Canberra, 1965

E. Bird, Making an entrance: the story of the artificial entrance to the Gippsland Lakes, 1989

Richard Hawkins, Creeks and harbours of the Gippsland Lakes: a guide to cruising and fishing, 1984

P. Synan, Highways of water: how shipping on the lakes changed Gippsland, 1989 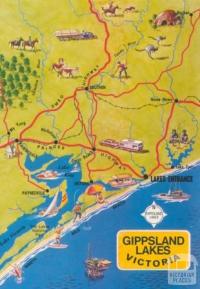 The Princes Highway, with the entrance to the Gippsland Lakes beyond, 1934

The entrance to the Gippsland Lakes from the verandah of the Kalimna Hotel, 1934

Aerial photograph of the entrance to the Gippsland Lakes, 1934

Lakes township, showing Bullock Island and entrance to The Lakes

Entrance to the Gippsland Lakes

The Entrance and Princes Highway