Eaglemont is an elevated residential suburb 10 km north-east of Melbourne. It was formerly part of Ivanhoe.

The name is probably derived from Mount Eagle, a Crown Grant property acquired by Thomas Walker, New South Wales, in 1838. Walker was the author of A month in the bush of Australia (1838) and he was one of the representatives of the Port Phillip District elected to the New South Wales Legislative Council in 1843. He sold the property to John Browne, father of the author Rolf Boldrewood.

Until the turn of the century Eaglemont was a place of large estates and scattered houses. The Depression caused some houses to be vacated, and the plein air school of painters were able to cheaply rent one at the Mount Eagle Estate, shortly after railway access was made possible by the extension to Heidelberg in 1888. Mount Eagle and the surrounding area were already renowned for fine views and appealing landscape.

As Ivanhoe underwent rapid subdivision in the years before World War I, Eaglemont was something of an elevated country retreat. A golf club was established in 1898, leaving the site in 1910 for one near the Rosanna railway station. A tennis club was formed in 1912. The move by the golf club and the formation of the tennis club coincided with the subdivision of several estates, which were provoked by a direct rail link to Melbourne in 1901. In 1902-03 Harold Annear, architect, designed three stylish and innovative houses at 32, 34 and 38 The Eyrie. In 1915 Walter Burley Griffin laid out an estate of three streets (Glenard Drive area), and other subdivisions bear evidence of his landscape ideas.

When the Eaglemont and Mount Eagle estate was subdivided for housing the advertisement stated that all streets were one chain wide and planted with choice English trees. Any house to be constructed was restricted to a value of £750 or more, two or three times the cost of more modest houses. That restriction has been maintained either by caveat or custom. Eaglemont's railway station and post office opened in 1926 and 1929.

Eaglemont does not have a local primary school, but there are two kindergartens. There are few local parks, but the landscaped streets and gardens and the views over neighbouring parklands compensate. There is small shopping centre near the railway station. It has active food outlets and several shops which sell antiques and home decorations.

The Mount Eagle site is bounded by Mount Street, Carlsberg Road, The Panorama and The Eyrie. In 1996 its grounds were reduced by subdivision.

Eaglemont's census population have been: 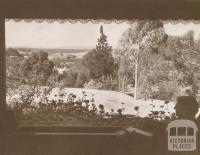