Croydon is a residential suburb 27 km east of central Melbourne, between Ringwood and Lilydale. The name came into existence in the 1880s, and was the name of the shire when the western part of Lillydale Shire was severed in 1961. Croydon was a shire, and then a city until 1994.

Croydon was first known as White Flats, and the centre of settlement was Brushy Creek which had churches and a hotel. (Brushy Creek was so named because of the tea tree which grew along its banks. It formed the eastern boundary of the municipality.) There was a Cobb and Co coach run from Kew to Brushy Creek, along the Whitehorse Road, in the 1870s, but the centre of activity moved south-west when a station was put on the railway line to Lilydale in 1882. The name given to the station was South Warrandyte because of the approximate association of the area to Warrandyte about 7 km northwards. The name did not meet with approval, and it was changed to Croydon at the suggestion of Gregory Lacey, the former owner of the land on which the station was built. His wife had been born in Croydon, Surrey, England.

In 1903 the Australian handbook described Croydon:

The clearing of timber released land for agriculture. Fruit growing increased, in common with neighbouring Doncaster and Templestowe to the west. The railway provided a means of transporting produce, and it brought excursionists to the area. A public hall and mechanics' institute were opened. The Croydon Market began in 1920. Between World War I and II the populations of Croydon township and district tripled to about 2000. The Victorian municipal directory, 1940, described Croydon as having a recreation reserve with four tennis courts and a bowling green, six churches, a hotel and a wine hall. There were also two banks, a guest house, a baby health centre (1927) and a golf course (1926).

Croydon became part of the post-war growth of metropolitan Melbourne along the radiating main roads and railway lines. There was more than a fourfold population increase between 1947 and 1961. In 1964, five years after Melbourne's first large drive-in shopping centre was built at Chadstone, the Arndale shopping centre was opened at Croydon. It was the first fully air-conditioned centre in Victoria. McEwans hardware transferred from a converted Army hut to Arndale, and the anchor tenant was the Safeway supermarket. Croydon was characterised as a rapidly rising outer suburb, with residential development amidst a fruit-growing district. As well as Arndale there were cool stores, factories and a native flora sanctuary.

In 1961 Croydon was the centre of a severance movement from Lillydale Shire to form Croydon Shire. The new municipality of 34 sq km contained parts of a few other localities as well as Croydon and Croydon North. Ten years later there was an intense debate on a change of municipal status from shire to city. The proponents of arcadian sentiment lost to the march of urban progress, which the subsequent Arndale shopping centre marked even more clearly. The opening of Croydon high school in 1958 and three more primary schools between 1962 and 1967 was further evidence. Tintern Church of England Girls' Grammar school later built a campus south of Croydon township.

Croydon has a main street shopping centre in the vicinity of the railway station. The Croydon market is nearby. A little to the south is the Arndale shopping centre and municipal offices situated in extensive parklands with recreational facilities. The Dorset golf course is to the east of the township. An active arts and crafts movement exists at Wyreena Community Centre set in two historic homes and gardens. South of Croydon but within the former Croydon municipality, is Bayswater North. It is traversed by Canterbury Road and a freeway reservation. There is a considerable amount of light industry in the area. By the 1980s only the northern part of the municipality was unsubdivided for housing. Croydon North, Croydon Hills and Warranwood, more distant from Maroondah Highway and the railway line, saw increasing amounts of rural landscape come under sale signs for land with views during the 1990s.

Croydon has a large parkland extending southwards from the town centre. It has several ovals, walking trails and a public hall. It is adjoined by Swinburne TAFE. The Croydon Golf Course moved to Yering in 2008 and its land came under houses in a few years.

West of the town centre there are two large retirement villages and a suite of Catholic buildings, comprising the Grey Sisters family care centre, a Benedictine monastery, the former Sacred Heart Monastery and a primary school (1993). At Croydon's western extremity on Whitehorse Road there is the Burnt Bridge shopping centre. On Croydon's southern boundary, Eastfield Road, there are the Cheong wildflower and public reserves and the Croydon Hills estate (1921), commissioned by Cheok Hong Cheong and designed by Walter Burley Griffin.

Croydon City was united with Ringwood City and parts of Lilydale and Doncaster-Templestowe to form Maroondah City on 15 December 1994.

Croydon township's and municipality’s census populations have been: 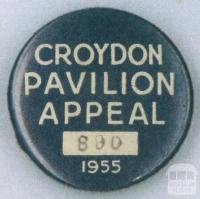 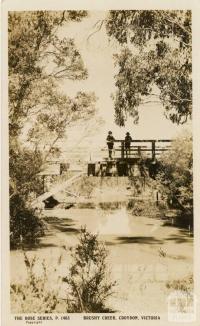