The township of Creswick was in the south-west corner of the shire, and was a separate borough from 1863 to 1934. The shire was north of Ballarat and west of Daylesford, and like those places had substantial gold mining.

Creswick township was founded on alluvial gold, and the northern part of the shire was primarily agricultural during the 1850s-60s. The principal town was Smeaton. To the south there was the Bullarook Forest, with Dean and Mollongghip. Immediately north of Creswick town deep lead gold mining began in the 1870s, and became one of the world's richest mine areas of that type. Generally known as the Berry Deep Leads, there was a dense belt of towns including Allendale, Clementson, Lawrence and Kingston. At a time when some gold areas were declining, Creswick Shire's population increased by nearly 1500 to 8000 persons in the 1880s.

The east of the shire included part of the Wombat Forest, and the volcanic soil in the foothills suited numerous crops, including potatoes. Deep lead mining and farm settlement almost denuded the eatern hills of tree cover, but softwood plantations and the Creswick forestry school led to a regreening and tree planting in towns and villages.

The shire's administrative centre was Kingston until about 1948. Kingston was on a railway line (1887-1953) from Daylesford to Creswick. There was also a small railway line from south of Creswick to Waubra (1888-1968), and the main line from Melbourne to Mildura passes through Creswick, having been opened from Ballarat to Creswick in 1874.

Both the shire and Creswick township underwent gradual population declines until about 1970 when upturns began.

On 19 January 1995, Creswick Shire was united with Daylesford and Glenlyon Shire and parts of Kyneton Shire and Talbot and Clunes Shire to form Hepburn Shire. 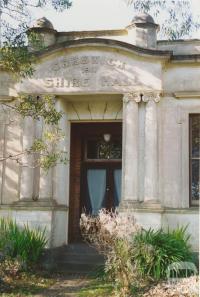 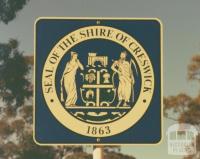