Cranbourne, once a country town and now a residential suburb in the large Casey region, is 40 km south-east of central Melbourne. The earliest settlers were the Ruffy brothers who squatted on Mayune run in 1836. They conducted the Cranbourne Inn, which may have been named after a town in Berkshire or after Viscount Cranborne.

There were few Aborigines in the district, but the discovery of numerous artefacts indicates that the area was fairly intensively occupied before European settlement. The early pastoralists grazed cattle and grew barley and wheat.

The township was surveyed in 1856, where a small community already existed on Mayune, then leased by Alexander Cameron. The track into South Gippsland also passed through here. From the 1860s, selectors were able to purchase portions of the large runs. The town was gazetted in 1861. Soon a school, churches, another hotel and postal service were established in the township. A Road District was created in 1860 and a Shire proclaimed in 1868. A Shire Hall was constructed about 1875.

Cranbourne was briefly famous in 1860 when several meteorites were discovered in the area. The largest was sent to the British Museum where it is still exhibited in the meteorite collection. Models of the meteorites are on display in the town.

The Australian handbook described the settlement in 1887. Although small, the town had developed as a market centre for settlers in the outlying Westernport area and as a link with Melbourne. 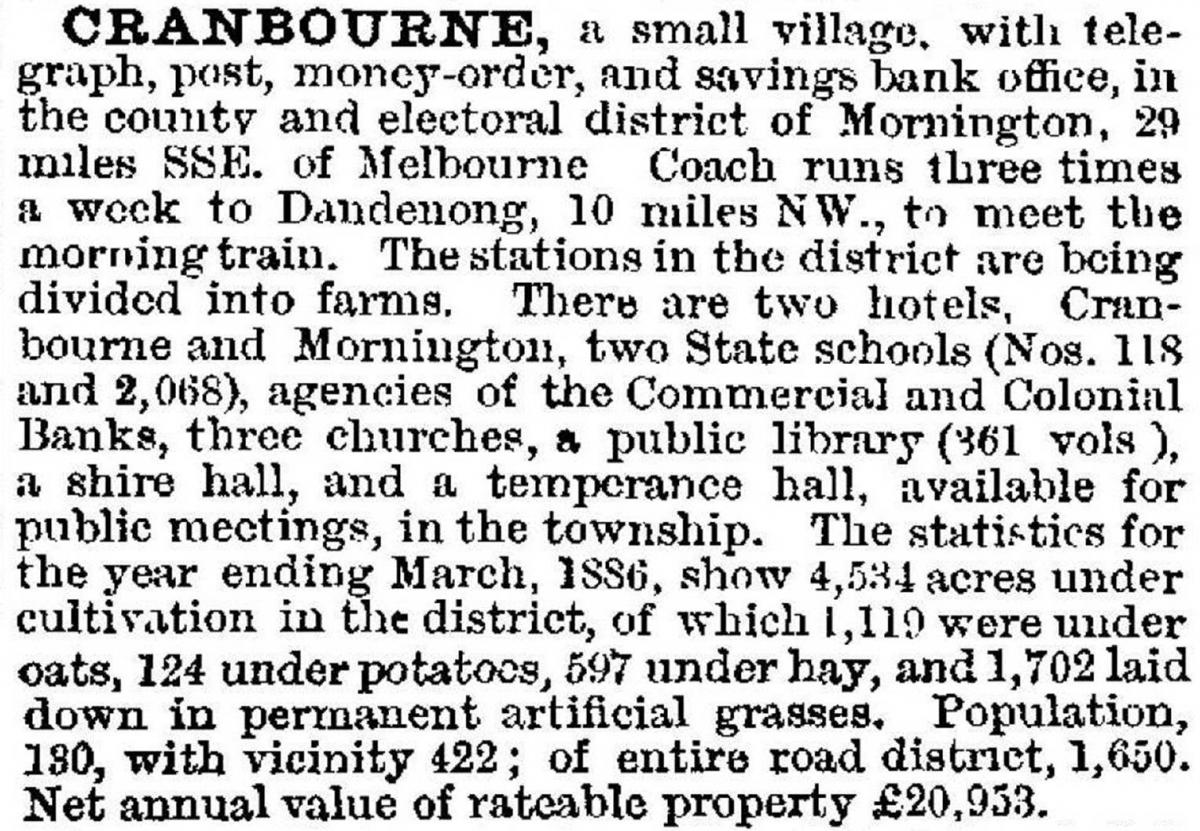 The rail line from Melbourne to South Gippsland reached Cranbourne in 1887. It did give a boost to the settlement but also undermined the importance of the town's stock market, as cattle could now be economically trucked to Dandenong or Melbourne. However, perishable produce from dairy farms, market gardens and orchards could now be railed to market. The town continued to grow slowly, serving as a market town for the surrounding district but overshadowed by nearby Dandenong. Dairying became an important industry, as well as grazing. The Australian handbook described the town in 1903:

The town was the focus of community life. Cricket, football and tennis clubs had been formed in the 1880s and 1890s. Horse racing also had a strong following in the district. A Turf Club was formed in 1860 and a course cleared by 1864. A new course and grandstand were opened in 1881. The Mornington Farmers' Society was founded in 1856. They held ploughing matches and annual shows. Later, the shows were held at Berwick in alternate years.

In the 1950s industrial development began to spread into the northern part of the shire from Dandenong. This gradually stimulated housing development at Cranbourne which has exploded in the 1980s-90s. The population was 1800 in 1976, rising to 14,005 in 1986. Suburban rail services and freeway linked the town to Melbourne.

Cranbourne races are an established event on the racing calendar. Greyhound and harness racing are also held. An annexe of the Melbourne Botanic Gardens is located at Cranbourne, devoted to the growing and preservation of Australian native plants.

On the east side of Cranbourne, the view from Narre Warren Road was open paddocks all the way to Clyde. On the south side of Cranbourne there was the racecourse, the Botanic Gardens and open paddocks to Pearcedale. The Cranbourne South primary school (1956) and general store in Pearcedale Road, farm houses and sheds were all that blocked the view. Within ten years there were vast housing estates and school campuses in Cranbourne East and the new suburb of Botanic Ridge and the Settlers Run golf course (2007) in Cranbourne South. The State Government announced funding for a new primary school in 2014 as well as increased capacity on the Pakenham and Cranbourne rail corridors following the removal of four level crossings and upgrading signalling technologies.

High Street, Cranbourne, doubles as the South Gippsland Highway. Traffic has not deterred retailing, and High Street is an active shopping strip. On its western side there is Centro Cranbourne (31,300 sq metres of floor space). Opened in 1984, it has two discount department stores, two supermarkets and 80 other outlets.

Census populations for Cranbourne and 'greater Cranbourne' have been: